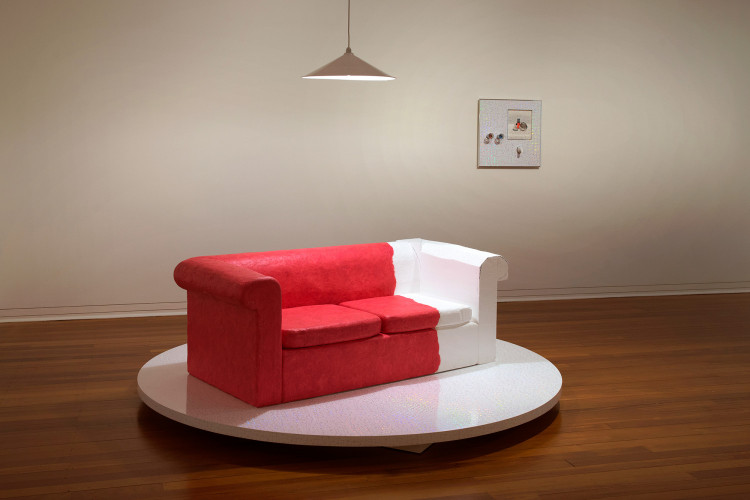 Flashe and carton pierre on polystyrene
Collection of the Dunedin Public Art Gallery. Given 2017 by the artist

In an incomplete state, Unfinished Couch is a two-seater couch made of polystyrene and papier-mâché. It revisits a couch motif that has reoccurred in Austin’s practice over a number of years – reiterating his interest in the domestic situation as a key subject. This couch motif also featured in his work Homesick (2012), as part of Austin’s Frances Hodgkins Fellowship exhibition The Liquid Dossier (2013).

Austin is interested in pictorial abstraction – attending to the intersections that come together to form an image (edge, frame, surface, depth). His works often pull and push viewers between these features; how he might explore the boundaries within an image, and what poetic and abstract associations might then emerge. In Unfinished Couch these concerns are brought into three-dimensional form, the semi-carved nature of the sculpture pulling viewers between the illusion of the object and the practical realities of its form and construction.

« Back to additions + alterations exhibition