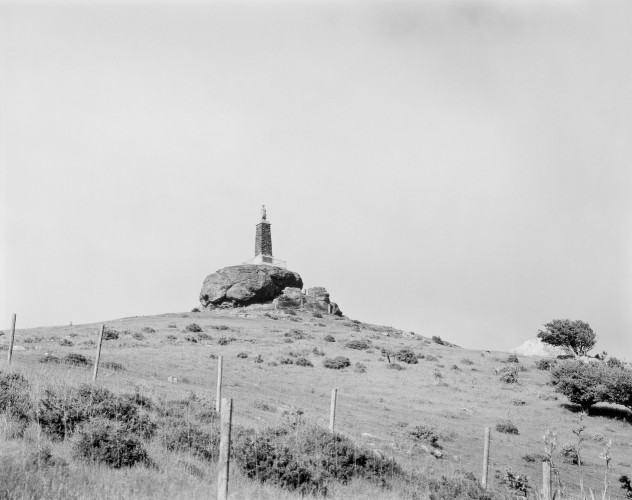 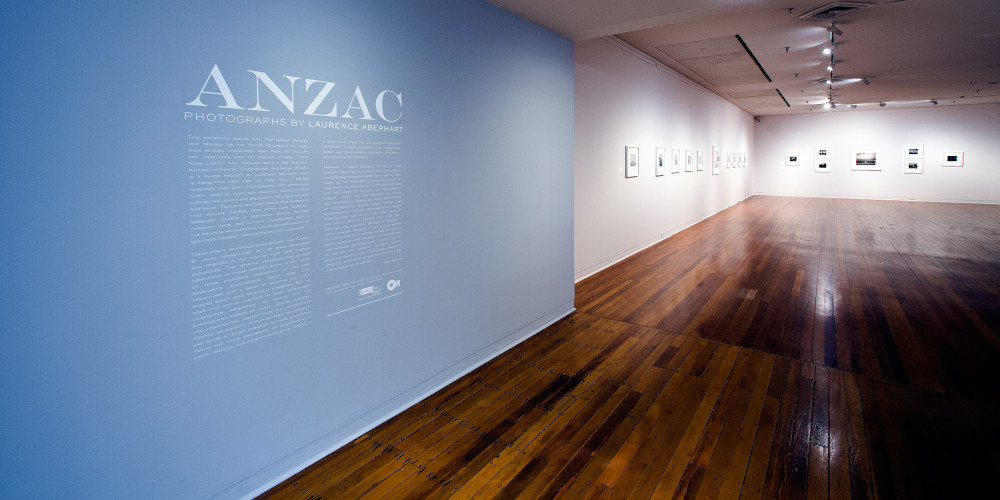 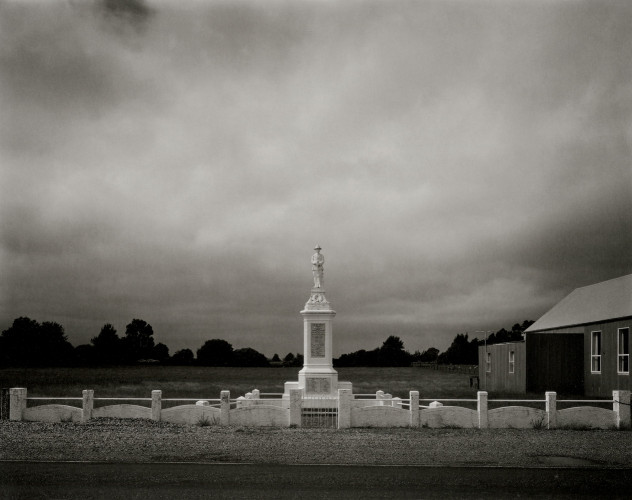 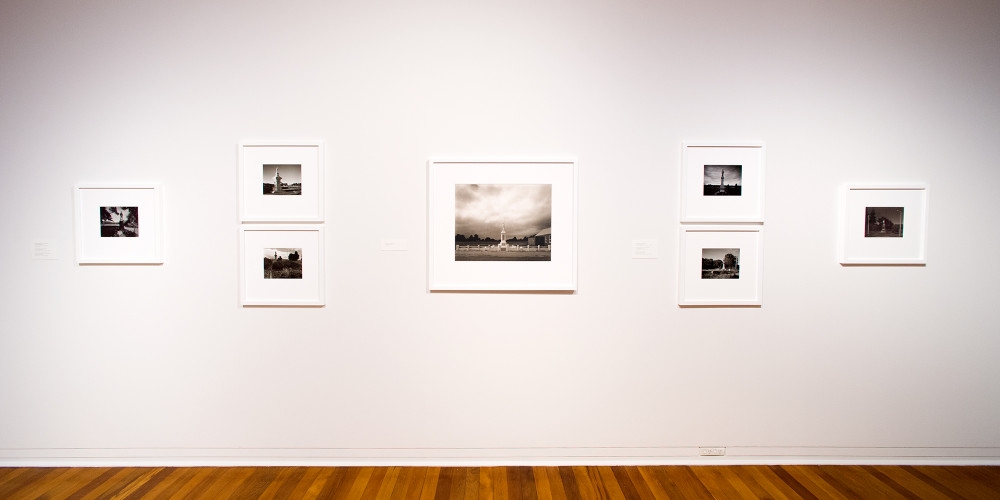 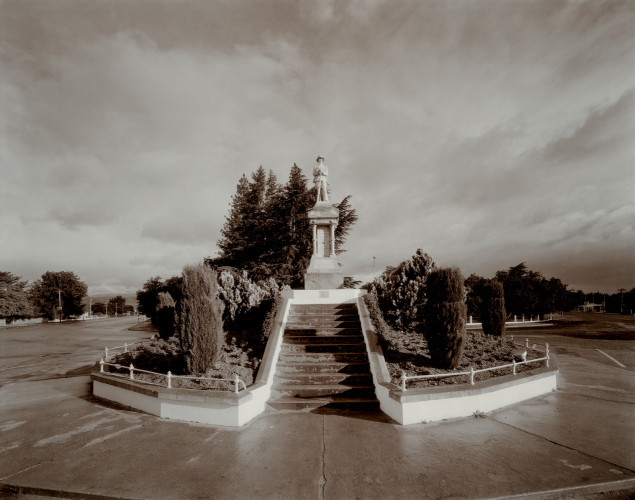 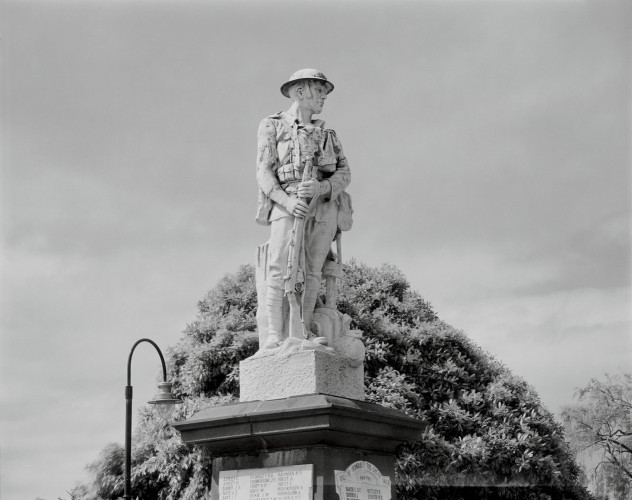 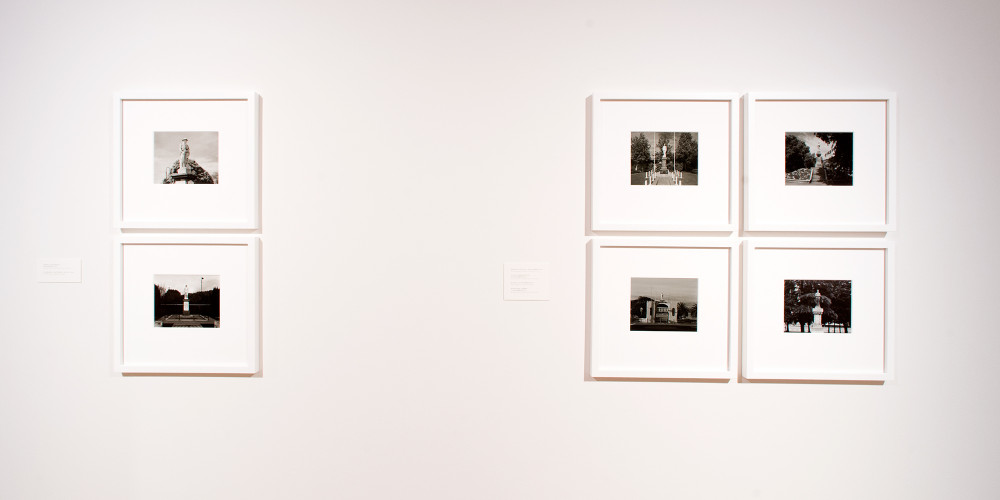 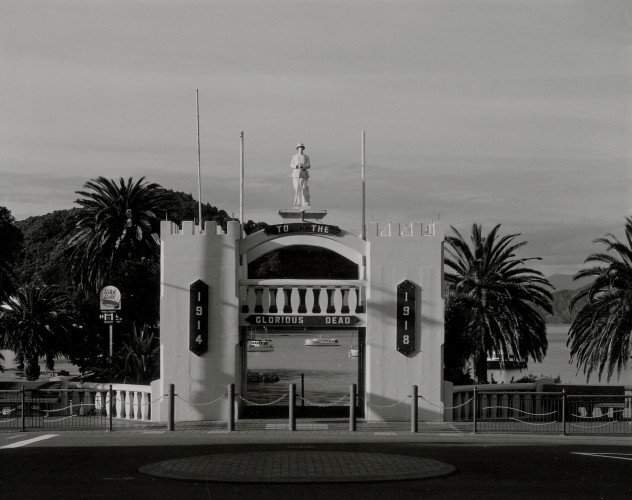 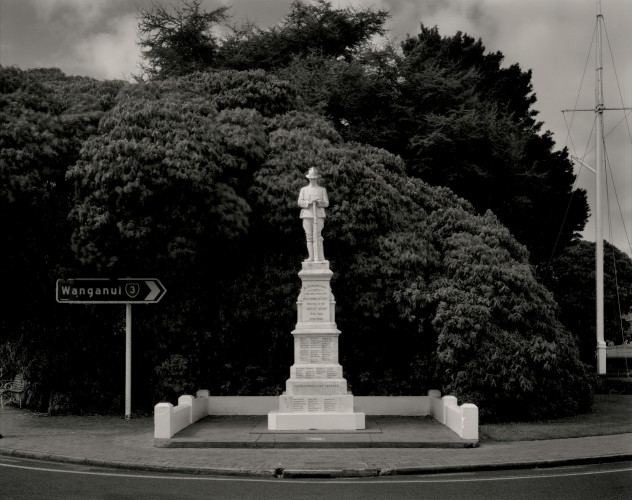 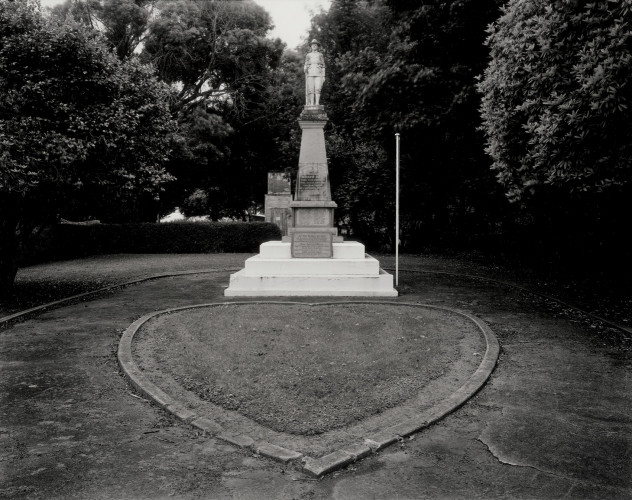 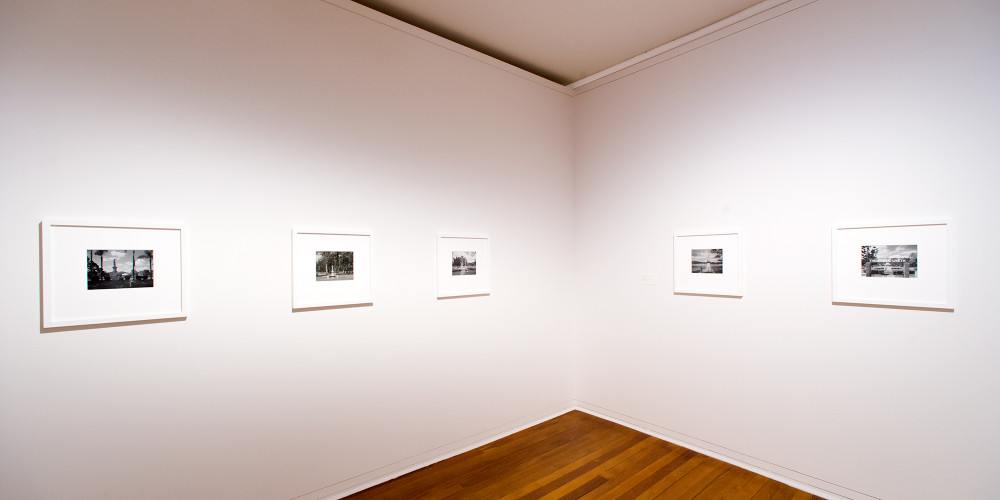 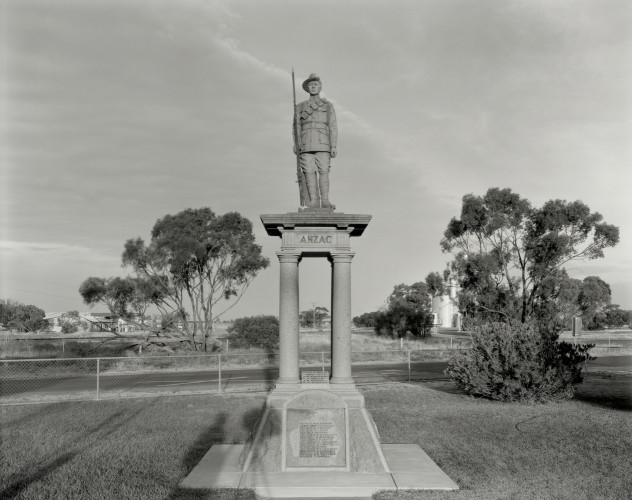 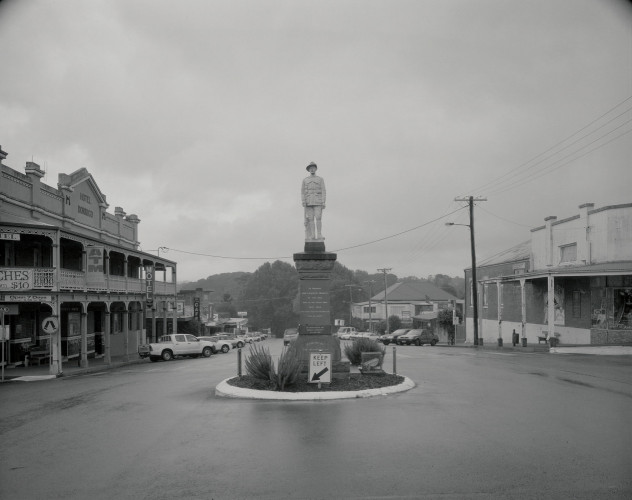 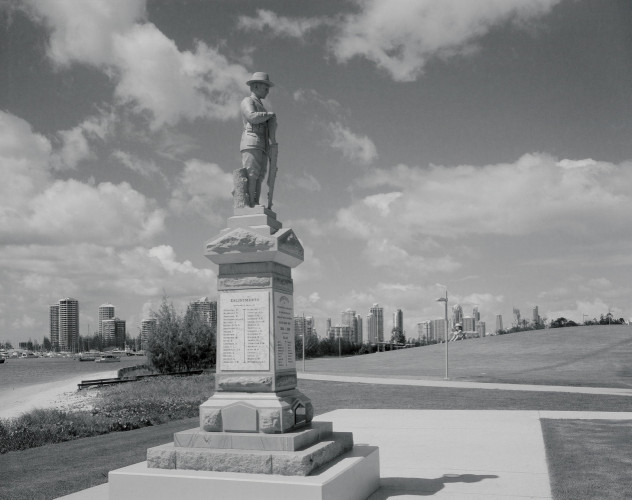 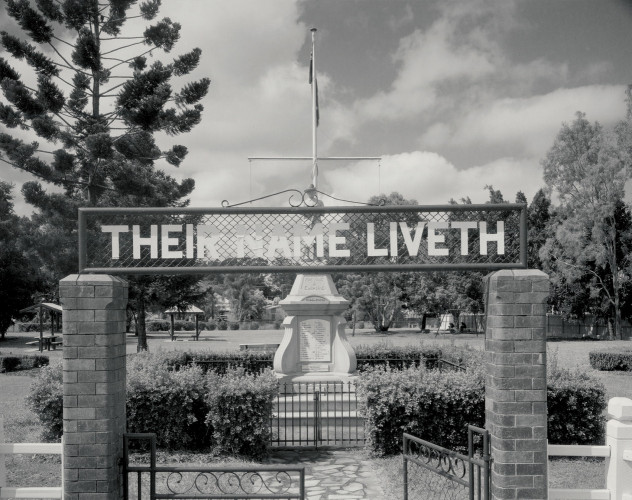 Late last year the acclaimed New Zealand artist Laurence Aberhart completed the final phase in a photographic series, which he has been working on for over thirty years.  This major exhibition of over sixty prints brings together a series of World War One memorials that include a single figure, and in the process it shrinks a sense of geographical and historical distance.  ANZAC is the stunning result that will be launched at the Dunedin Public Art Gallery as part of the WWI commemorations.

This exhibition begins with The Lonely Soldier who resides on the Otago Peninsula no more than several kilometres away from the Gallery and concludes with the biblical phrase “Their Name Liveth” that appears above a war memorial gateway in Ipswich, Queensland, Australia.  ANZAC is a major project by Laurence Aberhart that is presented here for the first time; it brings together over sixty photographs that span over thirty years of sustained practice, taking in sites across the length and breadth of New Zealand and Australia.  Focusing on First World War memorials that include figures, most often lone ‘diggers’, Aberhart charts a seemingly simple pathway through these two nation’s landscapes, but in the process he unearths a complex topography of gestures, imagery, ornamentation and language.

These public memorials commissioned and funded by local communities, act as stark reminders and tributes in the face of what were massive casualties. They started appearing and became ubiquitous in these regions within a few years of these countries engagement in this war.  Aberhart’s photographs imbue these civic structures with a sense of gravitas that their makers would have originally envisaged. But, he does this not by cleaning up their increasingly dilapidated appearance or editing out the encroaching forces of unruly nature, suburbia and urbanisation.  Instead there is an inherent and compelling dialectic at play between the formality and sense of stasis embodied in these sculptural forms and their appearance or registration in empty, marginal and ever-changing sites.  ANZAC is a longitudinal study that has relied on this artist returning to these memorials over a prolonged period and maintaining a consistent conceptual and technical methodology.

Aberhart is widely regarded as one of New Zealand’s greatest and most technically proficient contemporary photographers. For close to forty years, he has produced an astounding body of work which is unrivalled in its intensity, richness and the layers of cultural and photographic history.  Over this time Aberhart has slowly and meticulously worked on series after series of photographic albums, which capture the remnants of civilisation; sleuthing out remarkable placeholders that reflect the slow march of time or the signs of peoples need to be seen, identified and recorded.  Because he operates in such a manner, Aberhart is able to look beyond the instantaneous or random and see the innately poetic, constant and emblematic in the seemingly most mundane and vernacular.  It is this facility, to capture the indexical ‘concrete’ moment, while suffusing it with a strangely unassuming grandeur, which distinguishes his work and makes it so singular and memorable.