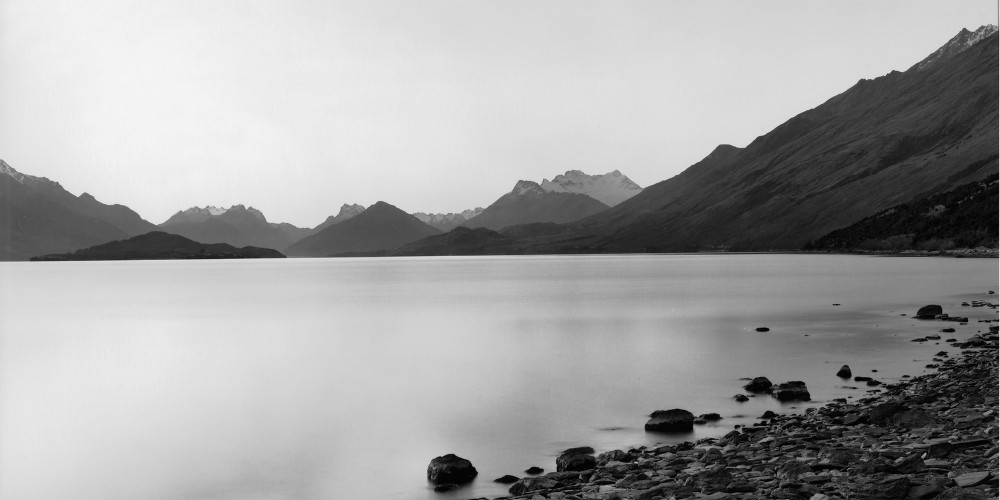 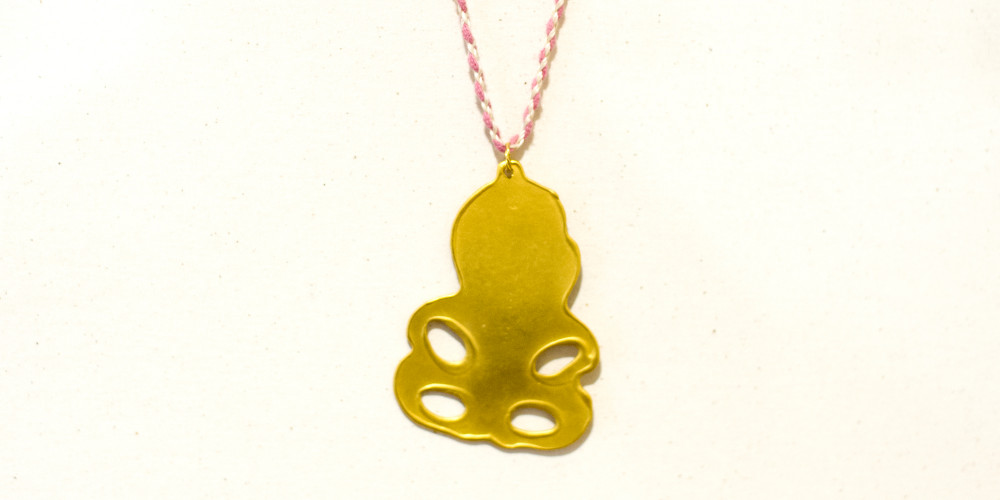 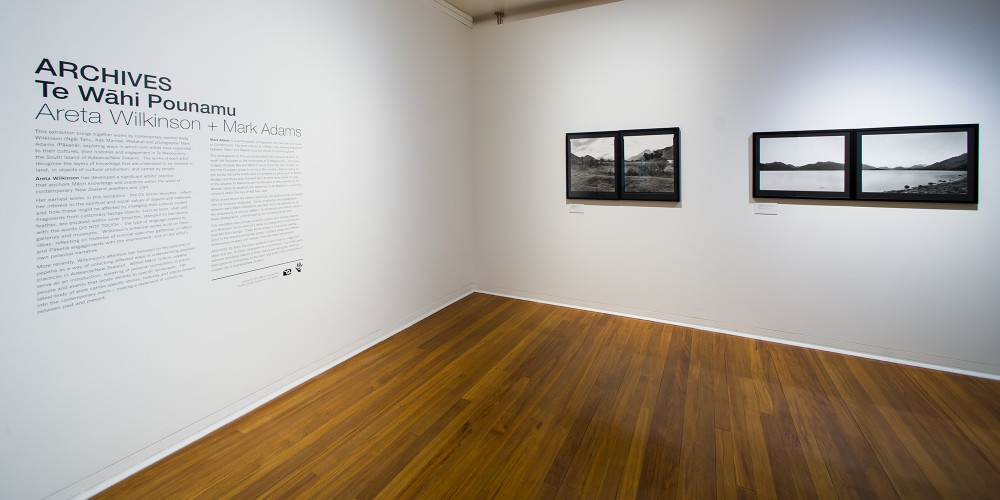 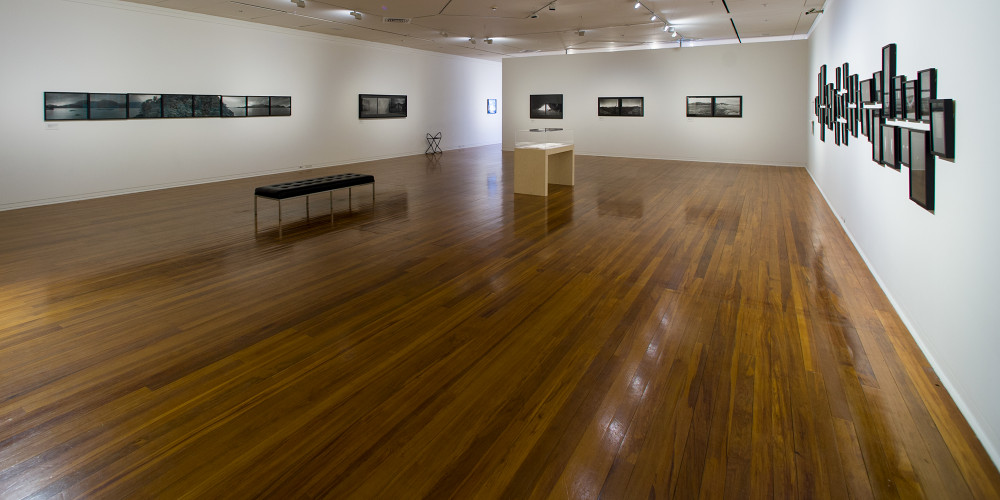 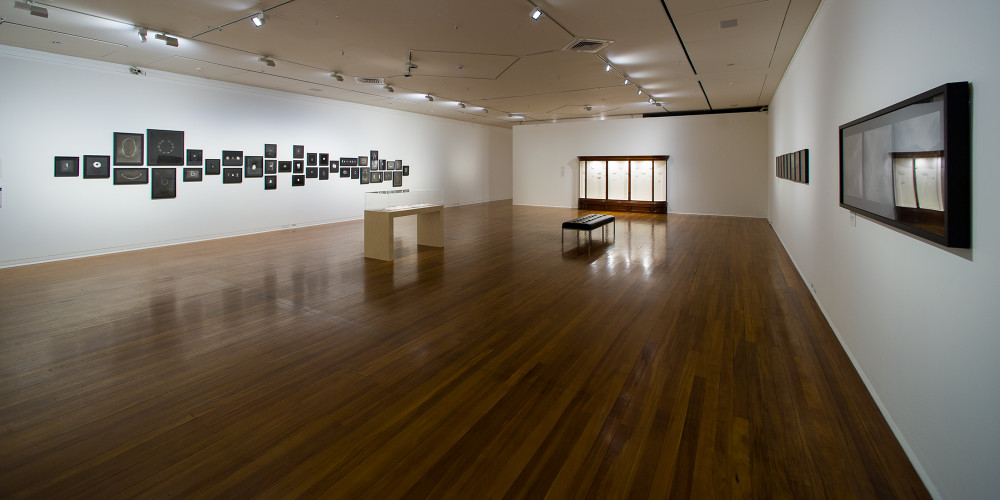 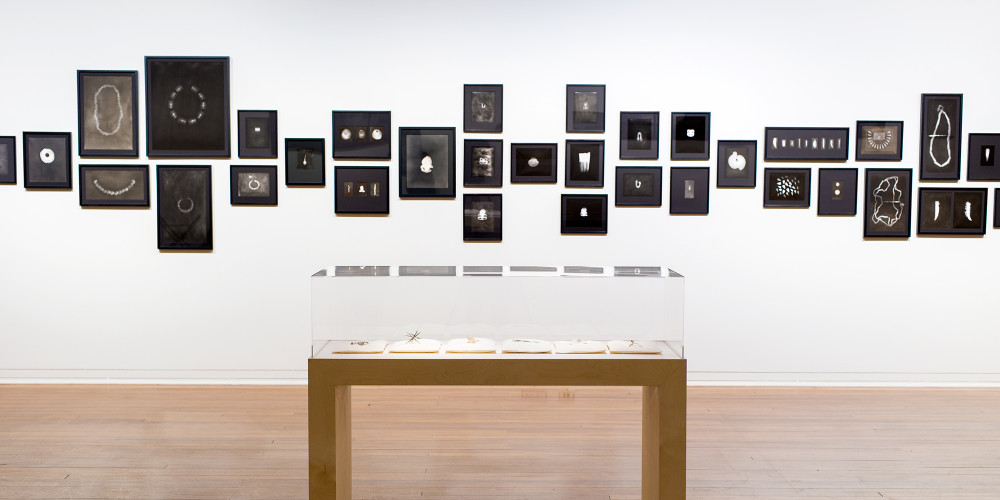 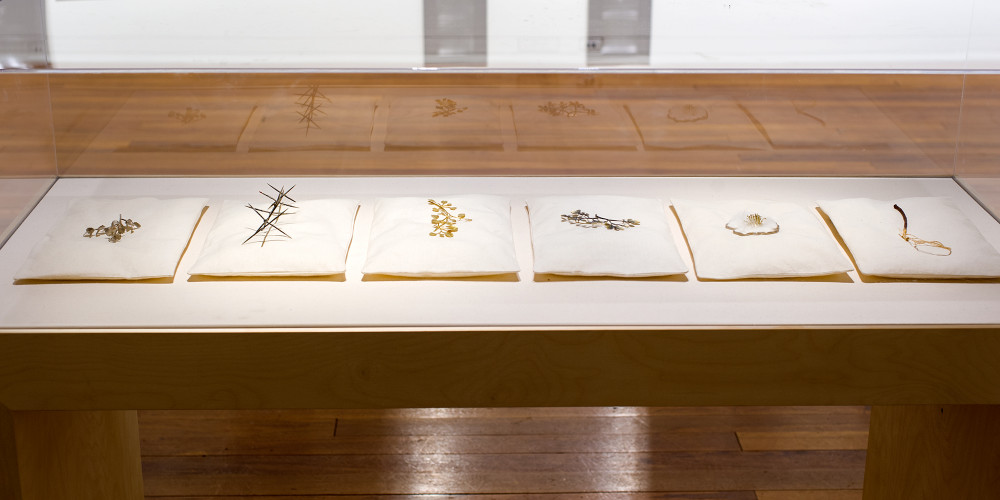 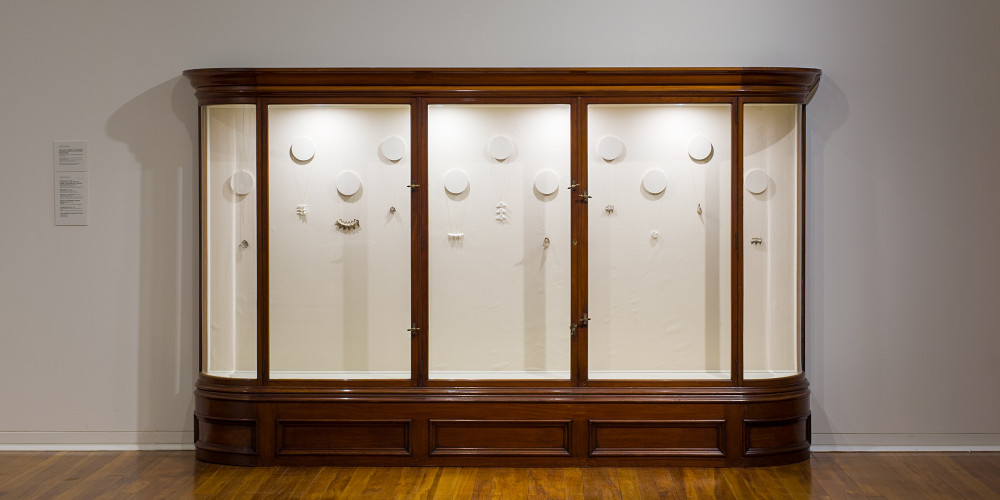 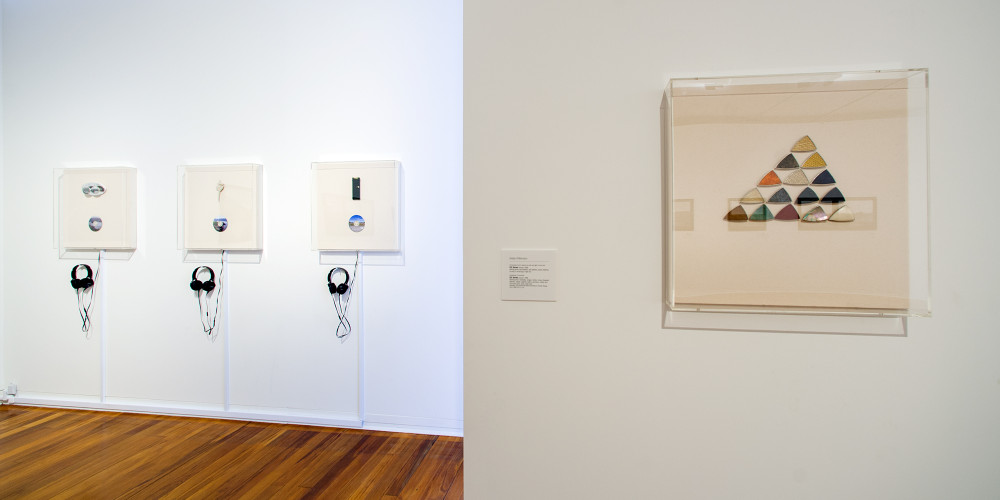 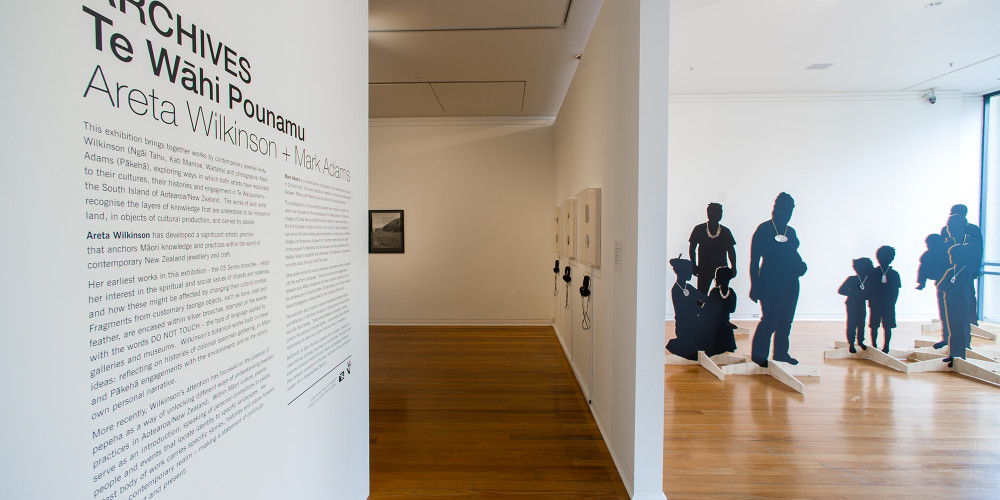 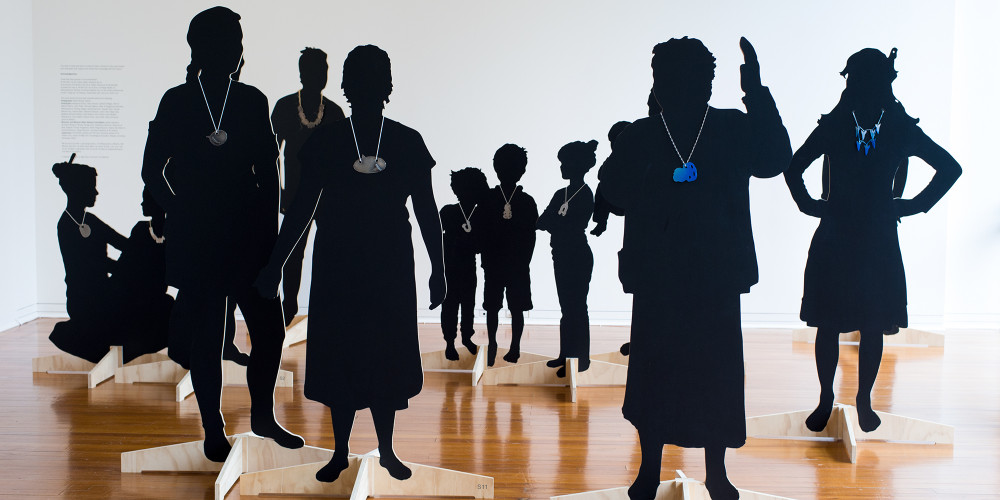 This exhibition brings together works by contemporary jeweller Areta Wilkinson (Ngāi Tahu, Kati Mamoe, Waitaha) and photographer Mark Adams (Pakeha), exploring ways in which both artists have responded to their cultures, their histories and engagement in Te Waipounamu – the South Island of Aotearoa/New Zealand.  The works of each artist recognise the layers of knowledge that are understood to be inherent in land, in objects of cultural production, and carried by people.

Areta Wilkinson has developed a significant artistic practice that anchors Māori knowledge and practices within the world of contemporary New Zealand jewellery and craft.

Her earliest works in this exhibition - the 05 Series brooches - reflect her interest in the spiritual and social values of objects and materials, and how these might be affected by changing their cultural context.  Fragments from customary taonga objects, such as bone, shell and feather, are encased within silver brooches, stamped on the reverse with the words DO NOT TOUCH – the type of language applied by galleries and museums.  Wilkinson's botanical works build on these ideas: reflecting on histories of colonial specimen gathering; on Māori and Pākehā engagements with the environment; and on the artist's own personal narrative.

More recently, Wilkinson's attention has focussed on the potential of pepeha as a way of unlocking different ways of understanding jewellery practices in Aotearoa/New Zealand.  Within Māori culture, pepeha serve as an introduction; speaking of personal connections to places, people and events that locate identity to specific landscapes.  Her latest body of work carries specific stories, histories and places forward into the contemporary realm – making a statement of continuity between past and present.

Mark Adams is a contemporary photographer who was born and raised in Christchurch. His work reflects an interest in the evolving relationship between Māori and Pākehā since the arrival of colonial explorers.

The photographs in this exhibition present key moments at which his work has focussed on the landscapes of Te Waipounamu.  Panoramic images of Dusky Bay and Milford Sound revisit the sites recorded by the first European artists to arrive in this country - Adams casting his eye across the same landscapes encountered by artists such as William Hodges and those who followed him. Another series tracks the path of the prophet Te Maiharoa and his followers as they travelled up the Waitaki Valley to establish the settlement Te Ao Marama; a response to concerns about the loss of Kāi Tahu land.

Other works record the various presences and absences that are layered into the southern landscape.  Traces of activities and engagements between early Māori inhabitants and their lands are captured, as are the endeavours of colonial settlers. Contemporary and historic coexist in these photographs, underpinned by the constancy of the land.

This exhibition also includes a recent collaboration between Adams and Wilkinson, in the form of a series of photograms of institutionally-held Kāi Tahu taonga.  These works present a conceptual meeting point in the practice of the two artists – a space where their different relationships to place and culture come into direct conversation.

ARCHIVES Te Wāhi Pounamu presents a set of objects, images and ideas that are, at times, discordant or uncomfortable. The artists' works examine individual notions of time, history and belonging; reflecting their personal connections to this land, and some of the complexities of modern life in Aotearoa/New Zealand.