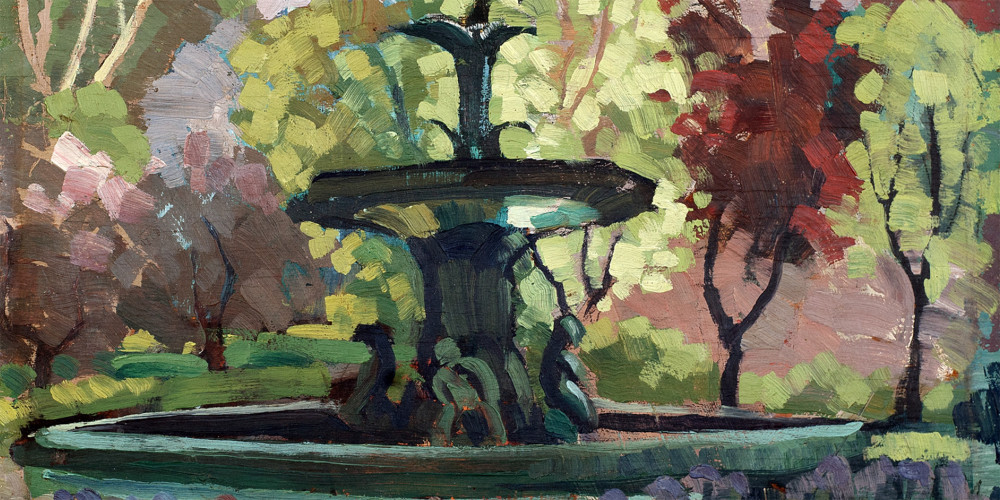 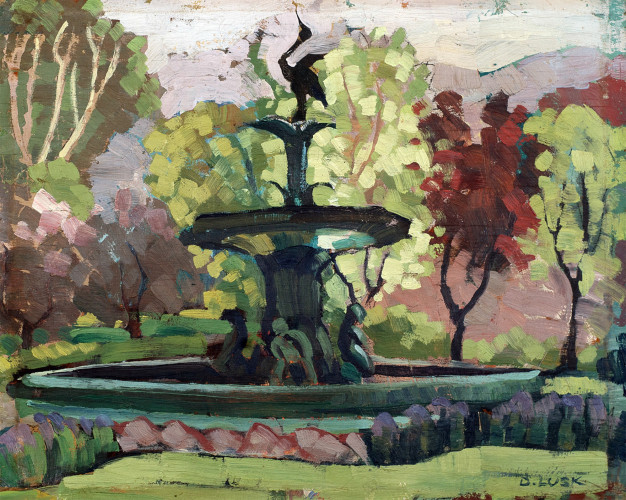 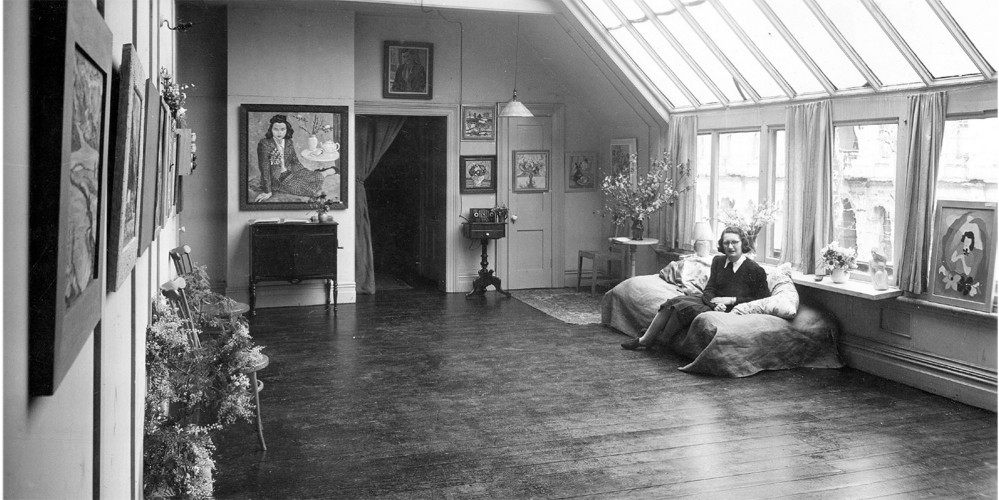 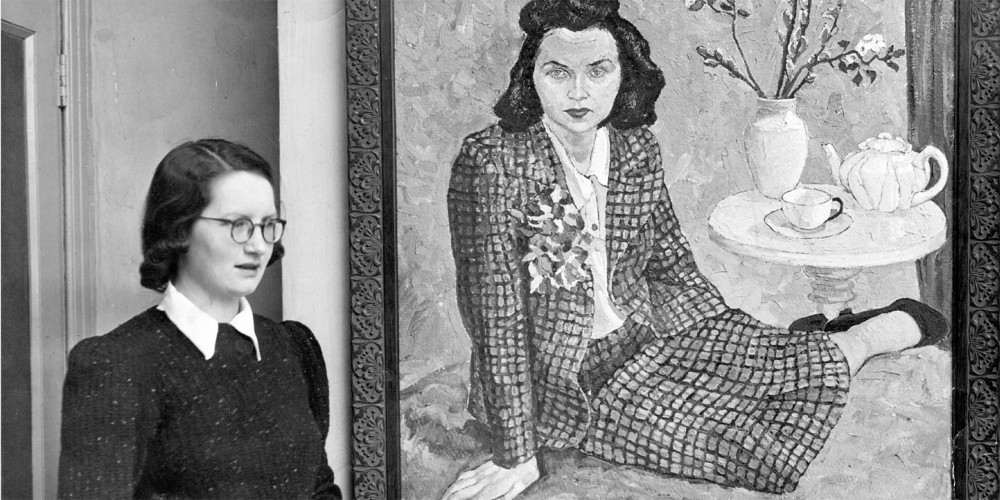 May 2016 marks 100 years since painter Doris Lusk was born in Dunedin.  This intimate exhibition presents key works by Doris Lusk drawn largely from the collection of Dunedin Public Art Gallery. Including the unveiling of a recently acquired painting by Lusk depicting the Wolf Harris fountain in Dunedin's Botanic Gardens, the exhibition celebrates this important New Zealand painter and explores her strong connections to the city of Dunedin.

One of the most recent acquisitions into the collection of Dunedin Public Art Gallery is a painting of the Wolf Harris Fountain in the Dunedin Botanic Gardens, painted by Doris Lusk in the late 1930s.  Despite its modest scale, this work offers a glimpse into one of the earliest moments in Lusk's career, and a vibrant period in Dunedin's modernist history.

Lusk was born in Dunedin in May 1916, and later raised in Hamilton. She returned with her family to Dunedin in 1928, when her father joined the architectural firm of Mandeno and Frazer.  From a young age Lusk had artistic aspirations, and in 1934 she finally began to realise these, enrolling at the Dunedin School of Art at King Edward Technical College.

The 1930s were an important period for Dunedin School of Art, as the school enjoyed the benefits of new thinking borne out of the 'La Trobe' scheme that imported practicing artists from Britain to revitalise New Zealand's art education.  Lusk's time at the school coincided with that of Robert Nettleton Field, a British artist that opened her eyes to key advances of international art.  At the same time, Field introduced Lusk to clay modelling; the precursor to her lifelong interest in making and teaching ceramics.

Lusk studied at Dunedin School of Art from 1934-1939. At the time, Dunedin provided fertile ground for New Zealand modernism, and it was in this setting that Lusk located her artistic thinking.  She formed lasting connections with fellow art students Anne Hamblett and Colin McCahon, as well as figures from Dunedin's community including Rodney Kennedy, Russell Clark and Charlton Edgar.  Her paintings looked strongly to the local landscape, and she undertook painting expeditions around Dunedin, Otago and further afield.

In 1939, as one of a small group of Dunedin artists, Lusk rented a studio in central Dunedin, which was located on the corner of Princes St and Moray Place.  This space provided the setting for work, exhibition and social gatherings, and marked Lusk's determination to pursue a career as a working artist from the earliest stage of her career.  In 1940 she mounted her first solo exhibition in the Moray Place studio, a successful debut but set against the backdrop of the escalating war.

Dunedin's close-knit artistic community began to disperse in the early 1940s, a combination of the war and natural attrition.  Lusk married Dermot Holland in 1942, and the couple moved north to Christchurch.  The following years were a busy and productive time in Lusk's life, and she found an artistic anchor in The Group – a collective of artists based in Christchurch that railed against art-society conservatism and promoted modern ideas.  At the same time she was managing the demands of motherhood, and was committed to maintaining her artistic practice alongside her family life.

Lusk was a prolific painter with an astute, modern eye, and her landscapes charted her travel around New Zealand. As her formal approach developed, she retained a particular interest in landscapes that carried evidence of human interactions and interventions.  In line with her modernist ideas, Lusk was drawn to the industrial - gasworks, pumping-stations, dams, mines and wharves all emerged as legitimate markers of her New Zealand landscape.

In parallel to her painting, Lusk maintained a studio ceramics practice, largely completing works under her married name of Doris Holland.  Although her interest in ceramics began at Dunedin School of Art, her influence grew in the late 1940s when she began teaching pottery at the Risingholme Community Centre in Christchurch. Much of her own pottery was earthenware, and her treatment of glaze and surface decoration often revealed her painterly interests.

Her connection to Dunedin remained strong, with the Dunedin Public Art Gallery mounting a retrospective exhibition in 1966.  The same year Lusk was appointed as a Lecturer in drawing at the University of Canterbury, a position she held for fifteen years.  The late 1960s and 1970s proved to be another period of vigorous production in Lusk's career, influenced by international travel, significant exhibitions and experimentation with an expanded range of media.

Lusk died in 1990, and the same year was posthumously awarded the Governor General Art Award.  It was an honour that reflected a growing understanding of her contribution to New Zealand art, which at times had been overlooked by the prevailing critical discussion around national art history.  Her career was characterised by her modern values, her innovation and commitment to art.

The paintings in this exhibition are brought together from the collection of the Dunedin Public Art Gallery and the Hocken Collections, University of Otago, with ceramics from private collections.