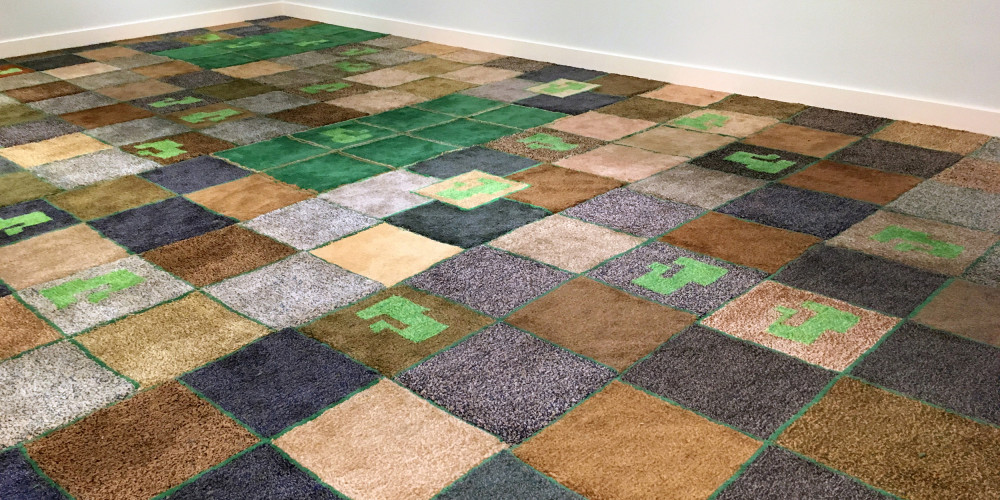 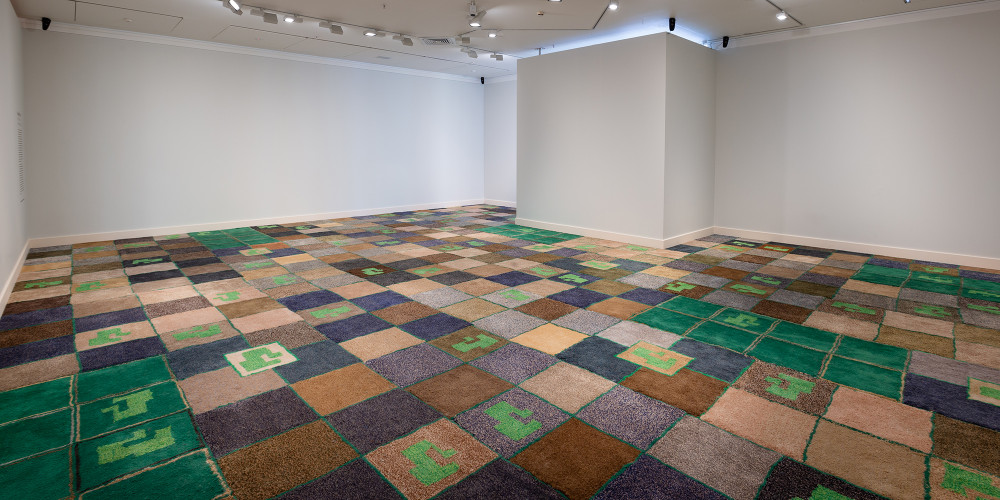 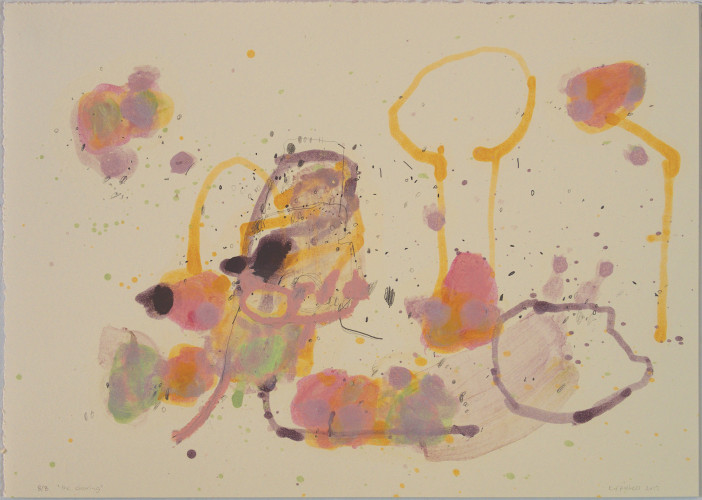 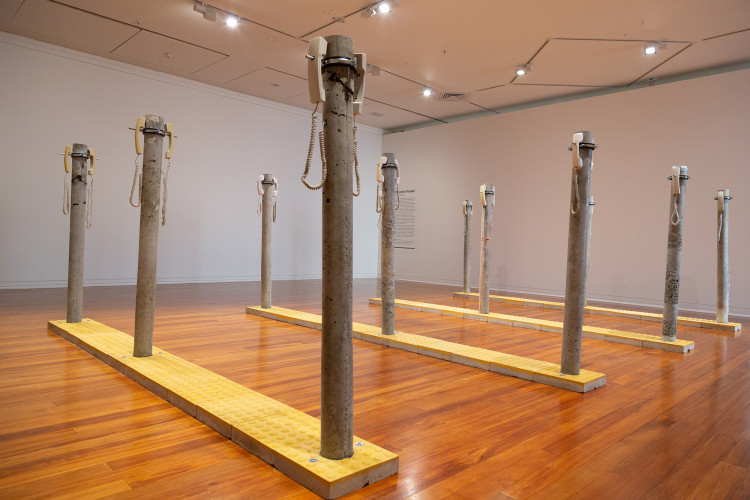 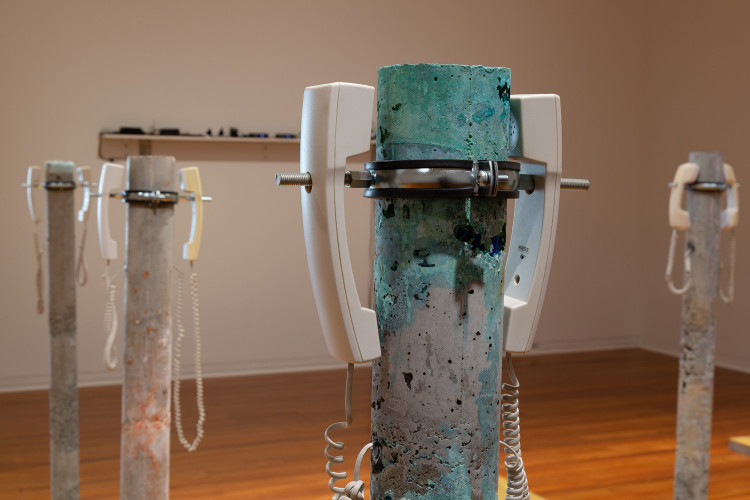 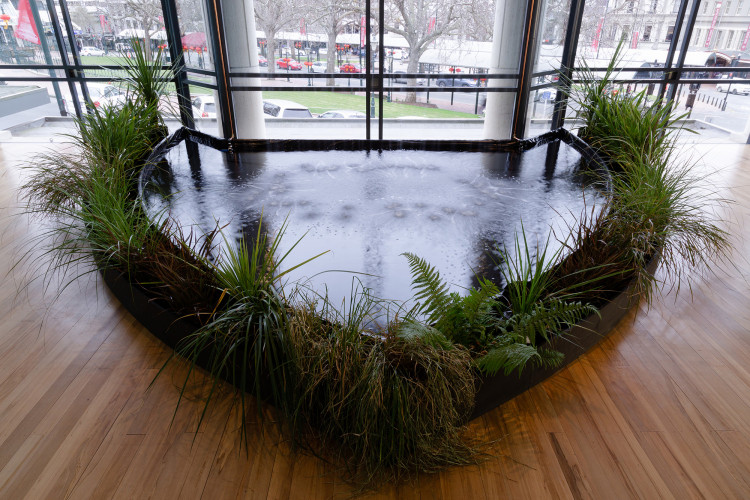 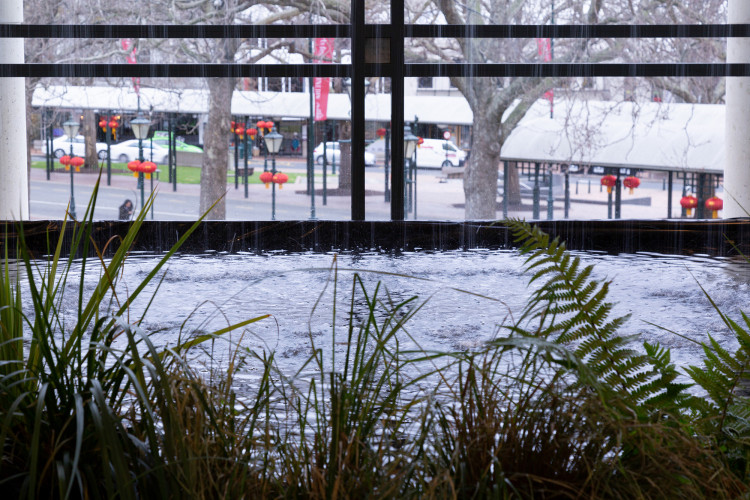 The non-representational preoccupation with matter – gesture, colour and line – is at the core of Kim Pieters’ practice. To Pieters abstract art presents a simplified/reduced version of something that exists in our visual world (e.g. an object, figure, or landscape), whereas non-representational art does not draw on a source from an external reality. Instead, it focuses on colour, shape, emotion and gesture.  Pieters’ work, whether on board or paper, starts with an empty field. A gesture is then made within this field; mark-making which informs each subsequent gesture – eventually building up the final composition. For Pieters this process is instinctive and improvised, the work slowly revealing itself as each gesture is made.

This exhibition brings together two bodies of work that reflect the dual strands of Pieters’ practice; strands that move through an annual cycle. Throughout the warmer seasons, Spring and Summer, Pieters will be painting large works on board, represented here by the series Notes for a Supreme Fiction (2015/16). In the cooler months, Autumn and Winter, she spends her time producing intimate drawings on paper, as with the clearing (2017). Both groups speak to the way in which Pieters works in series, each individual work autonomous but also part of a larger suite that is distinct and self-contained.

While gesture, colour and line may be the nucleus of Pieters’ practice, the self-imposed cycles of production, editing, and the presence of language hover around these elements. Titles, which are often drawn from philosophy, poetry or music, act as a supplement to the work itself – sitting independently but in conversation with the work, adding another layer to the intimate interaction between the work and the viewer. Pieters offers up each composition and title to the viewer, asking them to apply their own thoughts, ideas and experiences. In this interaction, Pieters seeks to construct a space that demands attention and affords contemplation.

Charlotte Parallel’s practice operates within a geophysical framework, engaged directly with physical properties and processes of the Earth. This has seen her explore areas such as sound waves, transduction, conduction, seismic vibrations, field-recording methods, and the relationship our bodies have to these processes. Parallel’s research phase is fundamental to the way in which her practice operates, revealing the potential of specific sites where she will record data, both above and below ground. This data, which is often inaudible in its raw state, is then translated into sound works. These works make visible/audible elements that are often overlooked, ignored or inaccessible in their original state, but constantly moving through and around our environment.

This exhibition explores the concept of deep time, or geologic time, in various locations across Ōtepoti Dunedin. Deep time, a concept developed in the late 18th century (but not coined until the 20th century), speaks to the way that key events and successive changes to the earth are measured over an expanded timescale, within the mineral make-up of the earth itself. This area of geological study provides a framework for engaging directly with the past, measuring cycles of sedimentation and erosion that have come to shape the land.

Parallel worked in collaboration with a seismologist, using sensors and computers to listen to and record the earth in sites across the city. Each site speaks to various stages of movement and distribution of earth including Te Wai o Tinirau / Makereatu / Blackhead Quarry, Walton Park Sand, Logan Point Quarry and in the base of various storm drains. In Deep time Parallel uses sound, accessed by the viewer through telephones, to analyse distinctive formational changes that have taken place within these sites – reminding us that the land is not static but ever-changing, responding and adapting to both organic and forced movement.

Megan Brady: A quiet corner where we can talk

Megan Brady is a dedicated observer. Taking an intimate and focused look at her immediate surroundings, she celebrates the quiet, but ever-present minutiae of everyday life – the unnoticed, the unseen and the overlooked. Public spaces are a continuing area of focus within Brady’s practice. Often transitory in nature, these spaces are designed specifically for navigation and interaction, including libraries, shopping malls, departure lounges, lobbies and waiting rooms. Brady’s work investigates the characteristics and intentions of these spaces which are designed to appeal to a wide demographic and be functional in nature, while importantly manage to offend the aesthetic sensibilities of no one. Beyond this visual interrogation, Brady also takes note of the music that often finds a home in these environments – strategically selected to instil a calm, comforting atmosphere but rarely actively listened to.

In A quiet corner where we can talk, a title taken from a hypothetical conversation between composer John Cage and the founder of ‘furniture music’ (background music) Erik Satie, Brady has produced a bespoke hooked rug that fills the gallery space. With the aid of an electric hand tufting gun, Brady has spent months handcrafting this carpet – a direct, laborious and physically demanding engagement with both materials and process. Brady has made a series of carefully considered decisions, from designing the carpet pattern with a birds-eye-view of the gallery’s spatial layout, to the custom-made ‘elevator music’ soundscape. A quiet corner where we can talk injects a sense of value and care into something that is seemingly banal – it is hand-made, a one-off, imperfectly perfect and heavy with Brady’s labour and time.

Eighteenth century British landscape painter William Hodges was a member of Captain James Cook’s crew for his second expedition through the Pacific from 1772-75. Hodges’ role was to document scenes of their journey, recording his impressions of both unfamiliar landscapes and cultures that inhabited them. On return to the UK, these artworks operated both as a record of early European encounters with Pacific nations, and as a promotion for the possibilities that lay beyond their homeland. In 1773, Cook’s expedition stopped in Dusky Sound (‘Dusky Bay’) for a six-week period. The location was captured in Hodges’ painting [Cascade Cove], Dusky Bay (1775) which comprised an idyllic scene of a waterfall and rainbow with Māori figures in the foreground. This painting presented a romanticised view of Aotearoa New Zealand and provided the starting point for Aroha Novak’s exhibition Cascade.

Novak’s practice consistently prods at the potential of space – questioning and highlighting the sociocultural histories of particular sites, the impact of impending environmental change, the functionality of public spaces, and utopian ideologies. Hodges’ painting represents his subjective experience and emotional response to place, in this case using the landscape to allude to the wonders of God and the power of nature. In Cascade, Novak re-contextualises Hodges’ vision from her position as a contemporary Māori artist. Through this lens, Novak presents her version of this staged utopia as a contemplative and immersive space; an additional layer of complexity added by its context within a public institution. Novak uses the presence and sound of water in the gallery to reflect its cleansing and restorative powers and its fundamental importance to natural life. Novak’s Cascade is an act of reclamation – proposing an alternative reading of the water to that painted by Hodges through his lens of colonial discovery.