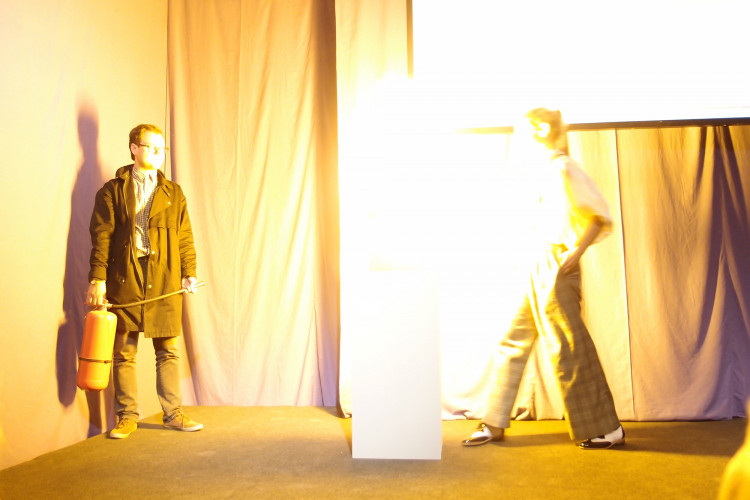 Over recent weeks the McMillan gallery has been transformed into a performance area where the Dunedin actor Patrick Davies has been rehearsing a script by the New Zealand playwright, Jo Randerson. The play was commissioned by the two internationally renowned Swedish artists Goldin+Senneby (available in manila folders when you enter the space), and was required to respond to the artists’ interests in the world of finance. The subsequent exhibition/theatre workshop has become a platform for thinking about the current economic situation, and it has also been a place for challenging ideas around staging an art experience and generating tangible agency between a performer and audience.

What you now see in this space are the marks, gestures and the signs of activity: coloured tape (each colour demarcates the day of a performance) plots out a series of specific stage elements (a desk, rubbish bin, financial machine/network and doorway/barrier); the red wall drawing is the accumulated results from the actors interpretation of a key moment in the script (“He squirts a handful of paint and throws/wipes it on a wall.  OR he draws a graph with it.”); the actor’s travel case of props/tricks (a collar and tie, pencil, bowler hat, key, typewriter, tube of paint, phone and clown nose).  So, this speculative project relocates a hidden theatrical space (the rehearsal space) into another context (the art gallery), which makes us reconsider the mechanisms of display and the creative process; the hand/role of the artist is hidden/masked behind the hired help - the actor and script writer.

The initial starting point for the Swedish artists originates in their own country’s history. Around the 1780s King Gustav III employed the services of the mineralogist August Nordenskiöld to work on a highly secretive alchemical research endeavour.  Nordenskiöld was attempting to produce gold, which in the king’s intention was supposed to boost the country’s wealth and sustain a war against Russia. Nordenskiöld’s covert agenda however was to make his discoveries available to all; ultimately aiming to abolish the “tyranny of money” by making gold worthless. A number of centuries later, the experiment continues with Goldin+Senneby’s reconsideration of August Nordenskiöld’s unfinished work by investing in the financial markets of today. Combining the production of theatre with the development of algorithmic trading models, their project proposes a continuous interplay between these two modes of speculation.

M&A (Mergers and Acquisitions) is a project that operates in a further dimension.  This is in part signalled by the book, which is deliberately isolated from the rest of the exhibit through where it is located and the fact that it is displayed in a museum cabinet.  The book contains a financial formula that has been generated by the New York based investment banker Paul Leong, who has devised a strategy for playing the market.  This financial advice was then converted into a digital algorithm, which was launched at the beginning of the show, as a means of paying the actor for his services. The theatrical production is entirely dependent on the merger strategies financial performance, with rehearsals continuing as long as the trading budget lasts (it ended on the 14th April). So the project speculates on a variety of issues such as the precariousness of labour in relation to the variations in funding both from private and public sources. It also raises questions about the relationship between the world of art and that of finance, against the backdrop of an increasingly complex interrelationship between the global and the local.