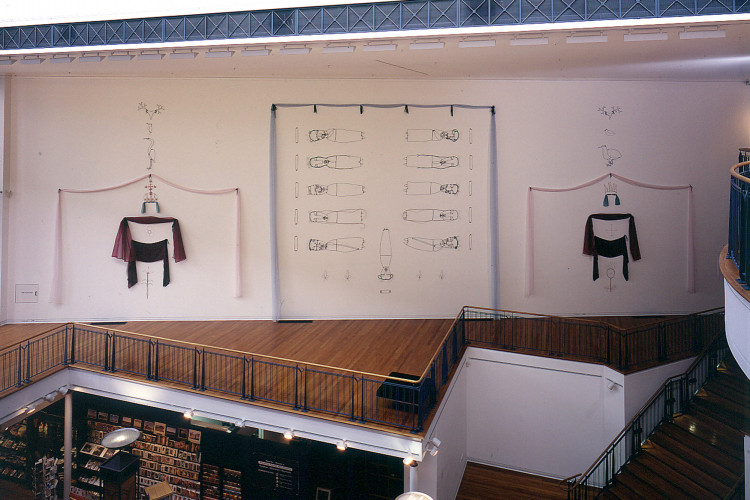 Te Wai Pounamu: the burial of our people

To celebrate the 15th anniversary of the Big Wall projects, the Dunedin Public Art Gallery has reinstalled Jacqueline Fraser’s Te Wai Pounamu: the burial of our people.  This work was the first project made for this series.  Originally created for the opening of the newly located Gallery in the Octagon in May 1996, this massive installation is the only site specific Big Wall work that has been added to the Gallery’s collection to date.  The work’s title and imagery makes clear reference to this Dunedin-born artist’s geographical and cultural lineage.  Te Wai Pounamu is the Maori name for the South Island.  Pounamu is greenstone - the legendary treasure of the South Island Maori.

The images are drawn using wire and veiled in delicate fabrics – organza, paisley georgette and chiffon.  The work recalls the “early Maori figurative art” from the late nineteenth century, where Maori artists incorporated European imagery, techniques and materials into their work.  It also fuses Maori textile traditions with European handicrafts, utilizing these elements as both a means to reconnect with the past and rethink the relationship between art and craft.  It is a combination that also serves to comment on the way new forms and techniques are established when two cultures meet, a merger that can also lead to cultural losses.  Fraser has stated with respect to this work that she wishes to celebrate the treasures brought by the Europeans, but also acknowledge the costs of contact.