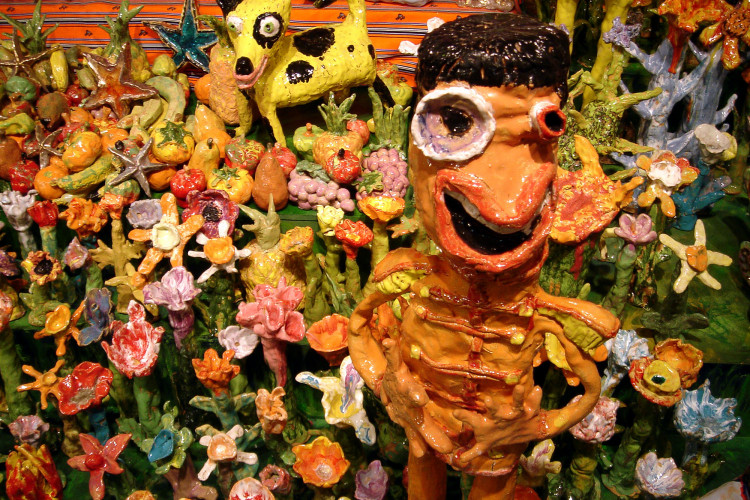 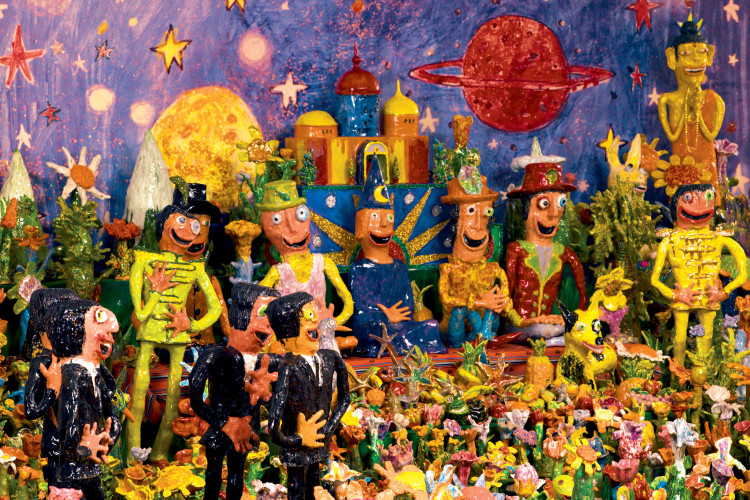 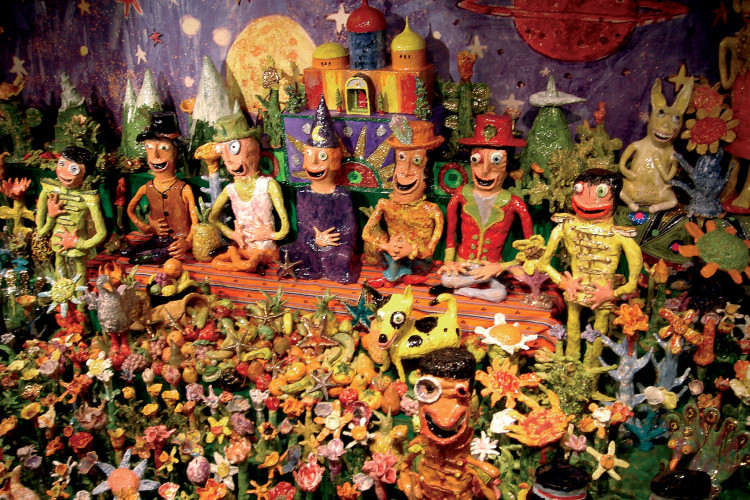 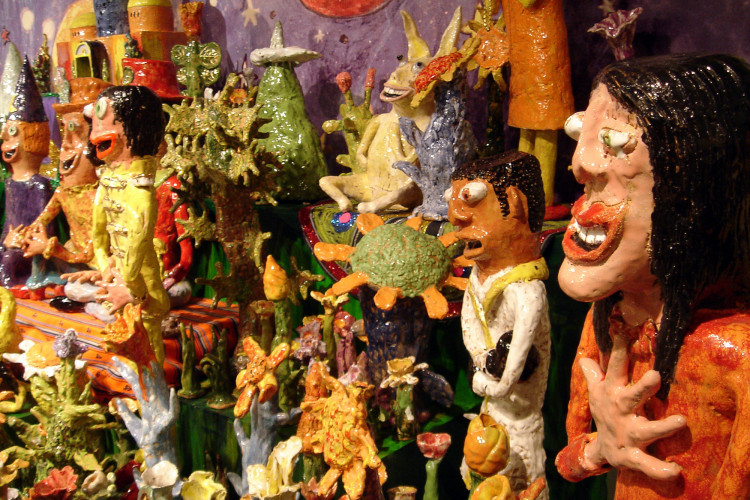 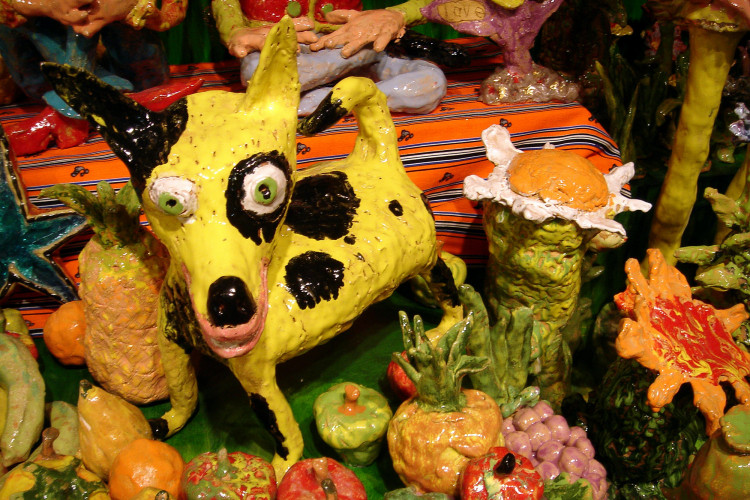 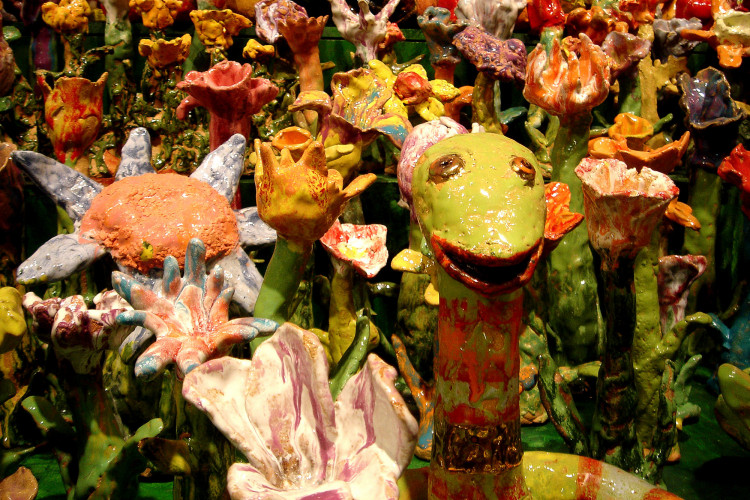 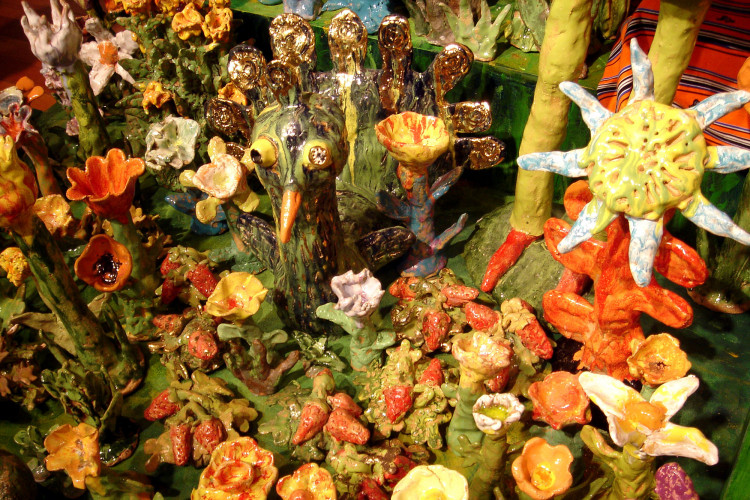 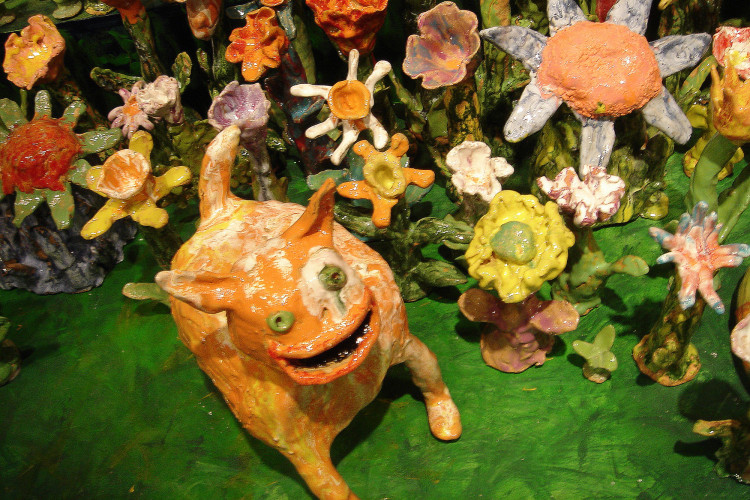 It is not surprising that this resplendent visual cornucopia of little beasties, melting flowers, cartoonesque mountains, starry-eyed figures and obsessively rendered vegetation makes reference to a series of infamous psychedelic rock albums from the late sixties.  Extracted from the back catalogue of Jim Cooper’s vinyl stack are the covers for The Rolling Stones Their Satanic Majesties Request (1967) and Cream’s Disraeli Gears (1967).

In Peppermints and Incense Cooper puts the Stones, Strawberry Alarm Clock and Cream through another wildly fantastical ceramic treatment.  This is an eye-popping experience, as these over-inflated pieces of album art are pushed to their logical Rococo extreme, becoming a distorting, gaudy three-dimensional scape.  A perfect tribute to the excesses of the flower power generation, this appropriately absurdist reformulation is a richly layered and colourfully restaged melding of a maniacal level of detailing with a laid-back sense of order.

Peppermints and Incense is a fitting follow up to the highly successful Sgt. Peppers exhibition that has been touring New Zealand for the last year.  It is no surprise that Cooper could not simply turn his back on the cast that appeared on this legendary Beatles album, but the relationship that Cooper forms with this musical memorabilia is not about producing a prescribed take, or indulging a particular obsession with this material.  Instead it is clearly a site where the artist feels comfortable to allow his imagination to wander through, and consider, a whole new series of humorous and tangential interventions. This is the kind of groovy environment where Buddha can contemplate from on high, Lauren Bacall can hang out in her glamorous yellow trouser suit with Laurence of Arabia and the Beatles can line-up waiting for their MBE awards in a single time-warped moment.