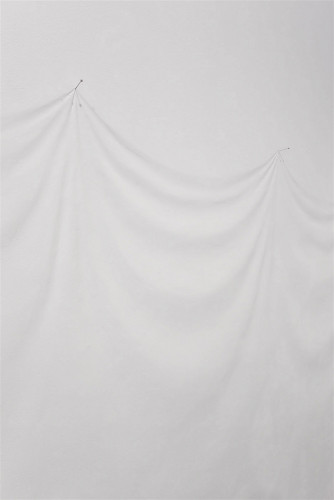 "The contemporaries and rivals of Zeuxis were Timanthes, Androcydes, Eupompus, Parrhasius.  This last, it is recorded, entered into a competition with Zeuxis.  Zeuxis produced a picture of grapes so dexterously represented that birds began to fly down to eat from the painted vine.  Whereupon Parrhasius designed so lifelike a picture of a curtain that Zeuxis, proud of the verdict of the birds, requested that the curtain should now be drawn back and picture displayed.  When he realised his mistake, with a modesty that did him honour, he yielded up the palm, saying that whereas he had managed to deceive only birds, Parrhasius had deceived an artist."

This quote comes from a well-known passage from Pliny about the famous painting competition between the legendary Greek painter Zeuxis and his young rival Parrhasius.  More than two and half millennia later, this compelling anecdote about the Western tradition of pictorial representation is strangely relevant to John Ward Knox’s wall carving ush.

Like the curtain designed by Parrhasius to deceive the unsuspecting viewer, Ward Knox has produced an immaculate visual trap through a simple range of materials and physical means.  This ghost-like shroud, which clings eerily to the wall, is both a successful trompe l’oeiland a fascinating meditation on the transformative nature of art.

ush, a title whose meaning is as mysterious as the object that it names, is a riddle that proverbially asks viewers to draw back the curtain to reveal and contemplate the art that lies beneath.  Ward Knox suggested ushfor this space, because he is interested in the way that the shifting natural light levels will both activate and eradicate this ephemeral wall hanging, so that it is in a constant state of suspended animation.