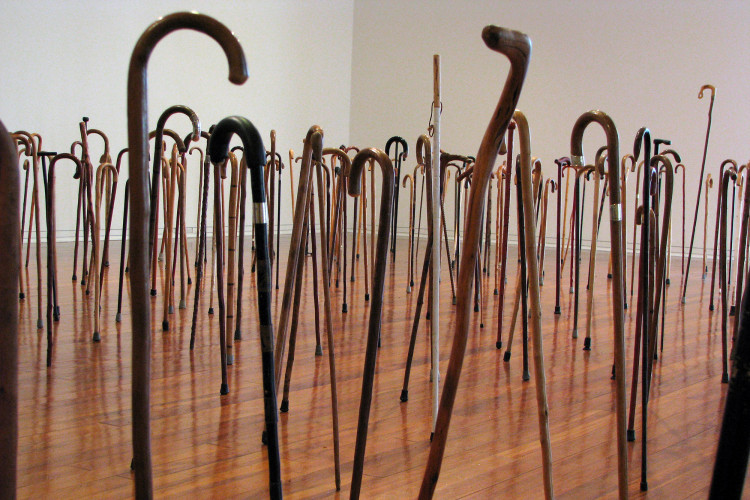 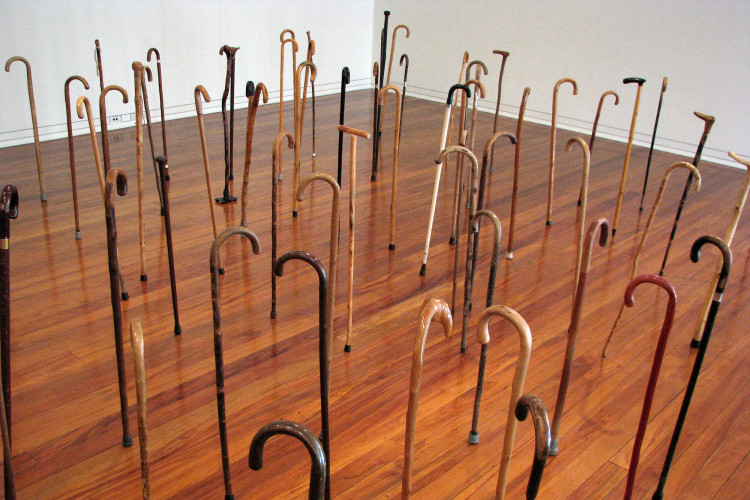 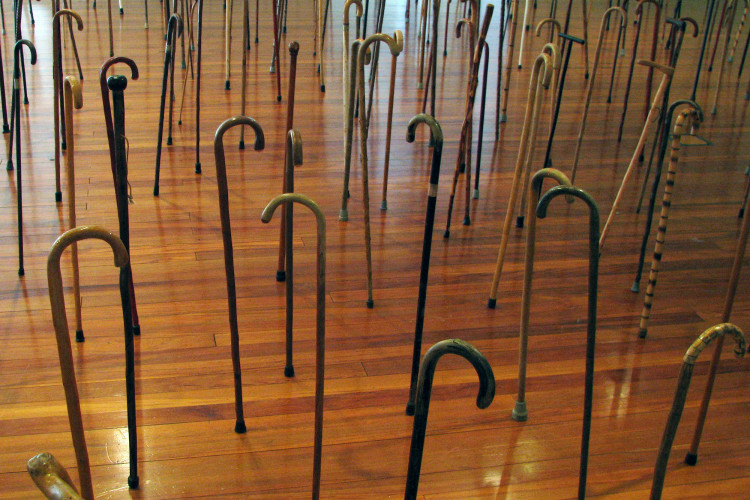 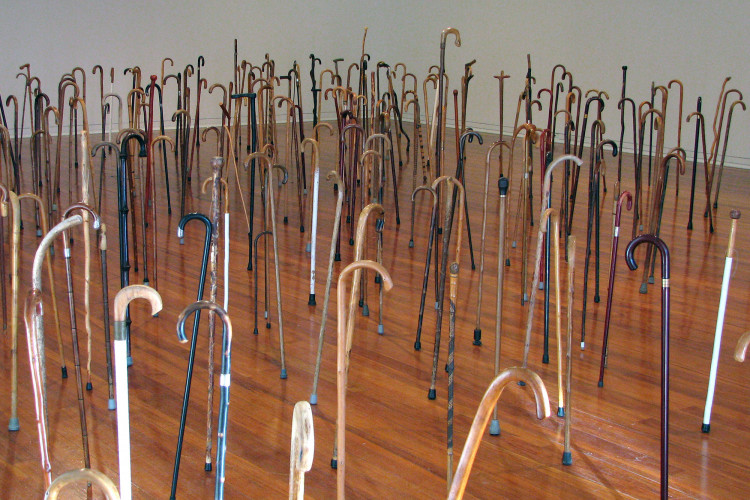 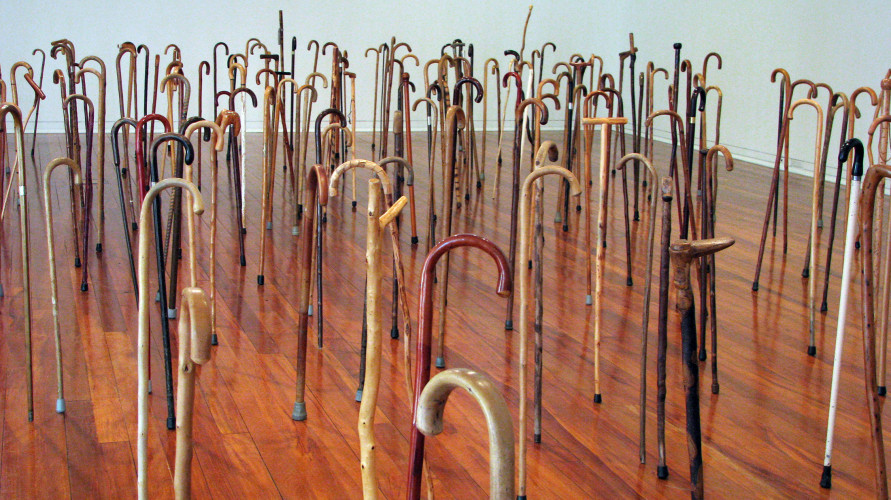 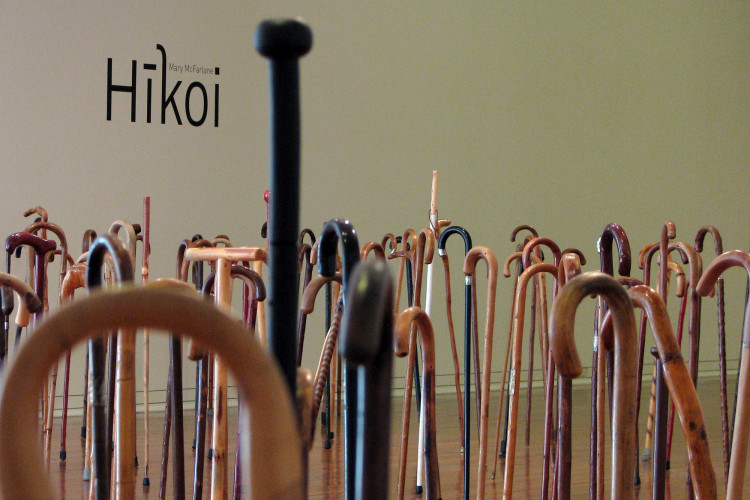 A field of sticks stand their ground. Held in place they do not simply fall under gravity’s weight. A collection of assorted parts these walking and hiking sticks show all the wear and tear of their previous existence – testaments to the daily grind and their unwavering support.  Each stick bears the marks of its owner – at times a dilapidated apparatus that has been pummelled into submission.  But there is something more compelling about these implements. They are not simply a neutral apparatus that has been shaped by the task it has performed, there is the sense that each stick has been subtly altered and personalised by its user.  These are necessary objects they are the inanimate partner of the ailing, crippled and tired - a companion and dependable friend that go well beyond simple utilitarian function.  Having said this, as a mass, these sticks, that include a cluster of hikoi sticks (from Kaitaia), evoke a more positive set of associations – they stand tall and proud ‘embodying passage into the unknown, bravery, strength, exertion and endurance. Is this what disability and old age is about?’1

Like a phantom limb brought back to life, Hikoi infuses these discarded, lost and decommissioned sticks with a poetic resonance.  It is through the very act of collection, reconsideration and recontexualisation that McFarlane is able to shape a new set of associations for these objects.  No longer simply a physical support they take on a deeper set of values, something more akin to a gathering of Maori tokotoko (carved ceremonial walking sticks). They have become talismans to a range of social, political and physical histories – talking rather than walking sticks.  For McFarlane hikoi is a particularly powerful idea because it literally means ‘to step’ but also   ‘since the land marches to Parliament, it has taken on many different meanings, a long journey, determination, fortitude, belief, a significant trip imbued with meaning.’2

An important point of reference for the Hikoi project is a simple black and white photograph of an elderly woman, walking stick in one hand, the hand of her mokopuna (grandchild) in the other. Walking away from the camera down a well worn gravel road this image captures the veteran leader Dame Whina Cooper on a hīkoi (march) in 1975.  The photograph documents the start of this march at Te Hapua in the Far North of the North Island that would eventually end at Parliament in Wellington to coincide with the passing of legislation that established the Waitangi Tribunal. But even beyond this historical account this image has been etched deep into the New Zealand psyche; McFarlane clearly remembers the shot appearing in The Southland Times in the mid-seventies. It is also the lone image in Hone Tuwhare’s Making a Fist of It, sitting alongside his tribute to the march and the powerful words of Whina Cooper:

No more lollies!  We been sucking the pakeha lolly

for one hundred and fifty years.

Think of that.  Good gracious, if we let them take what

is left we will all become taurekareka.  Do we want that?

So you listen, now.  This is a Sacred March.  We are

marching because we want to hold on to what is left.

You must understand this.  And you must think of your

Tupanas. They are marching beside you. Move over, and

make room. We are not going to Wellington for nothing.

And don’t be mistaken: Kare tenei hikoi oku, he hikoi