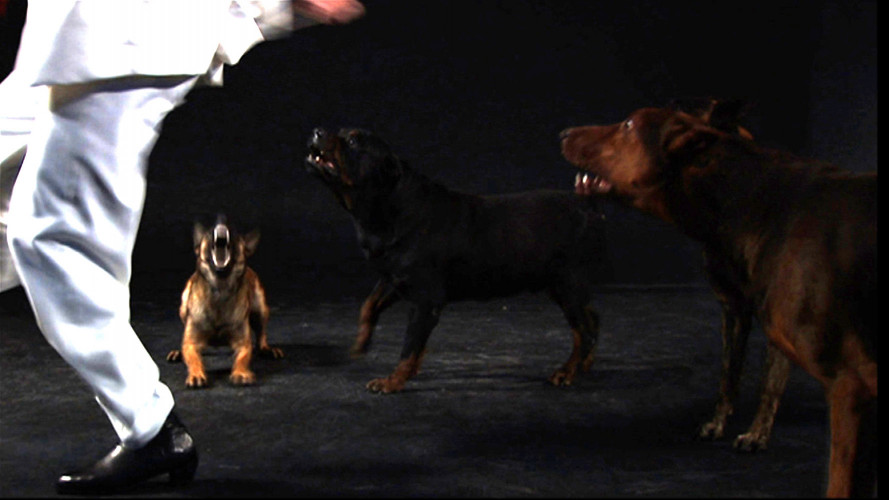 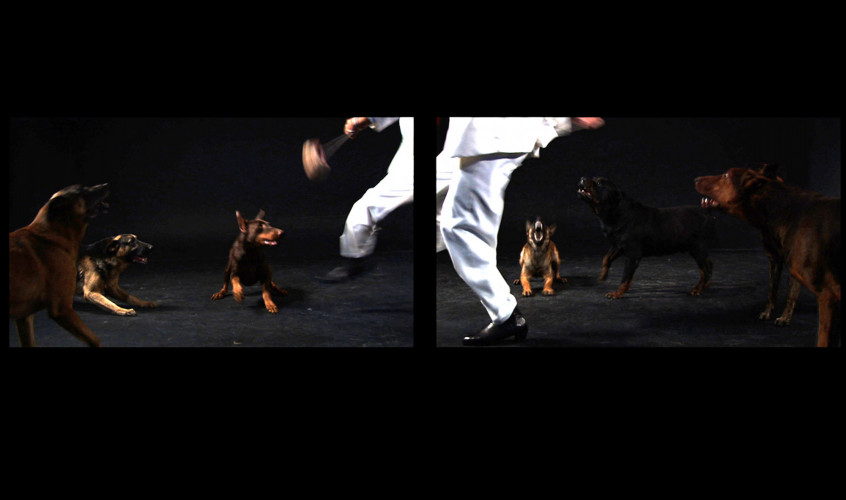 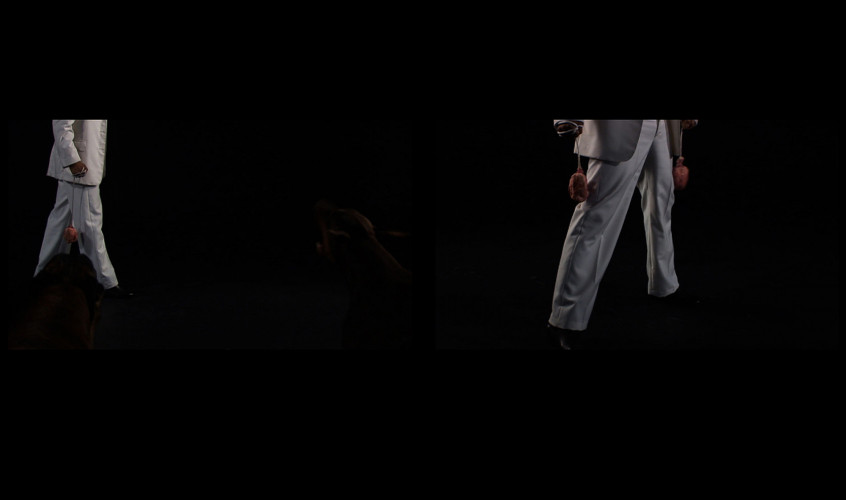 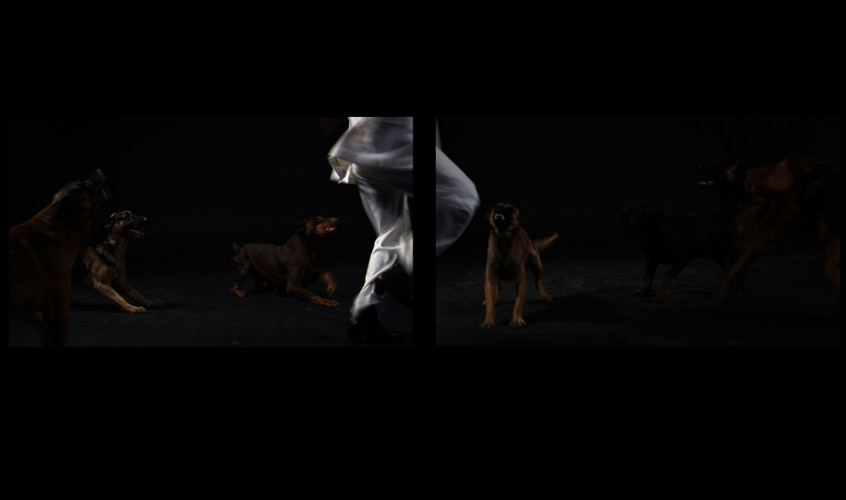 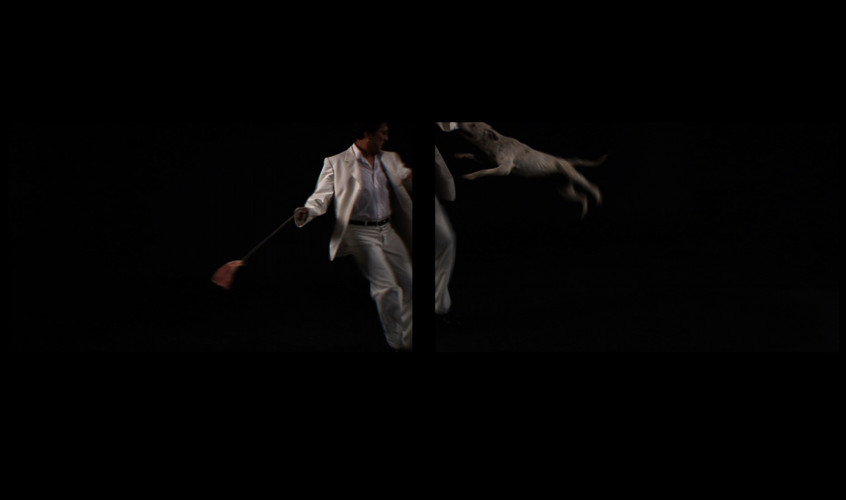 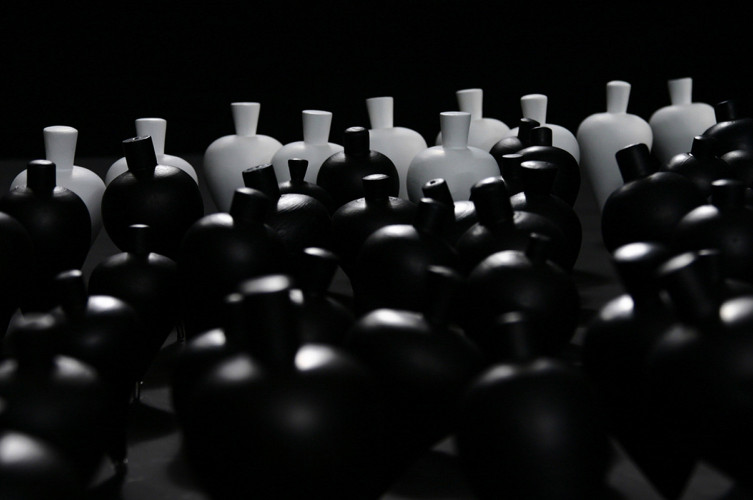 Foreign Exchange brings together two videos by the acclaimed Argentinean born, New York/Mexico City-based artist Miguel Angel Rios. This is the first time New Zealand audiences have had the opportunity to experience the highly charged and deeply evocative works of this senior figure in the Latin American art community.

White Suit addresses issues relating to the politics of space, and in particular zones of contact, especially when the relationship slips uneasily between respect and antagonism. White Suitis a particularly challenging video that starts with a mesmerizing performance by a male flamenco dancer who is abruptly interrupted by a pack of barking dogs.  In the compelling sequence that follows, the dancer provocatively confronts, dances through, and makes offerings of, assorted cuts of meat that he swings teasingly back and forth from lengths of rope, to the increasingly agitated beasts.  In the ensuing frenzy man’s best friend quickly shifts its attention from the slaughtered offerings on the ground to the fresh kill in the white suit that continues to dance among them.

It is not difficult to draw parallels between this dance sequence and the history of Latin America, both in terms of the pre-Hispanic Indian ceremonies and the bloody period of colonial contact.  This reference is especially important because a distinctly Indian looking dancer performs the flamenco routine, whose origins are closely aligned to Spanish culture. In this highly orchestrated sequence the notion of the interconnections between the human and the animal kingdoms, between men and dogs, is explored both on a symbolic and very real set of levels.

Miguel Angel Rios On the Edge 2005

On the Edge is designed to be an overwhelming sonic and visual experience that surrounds the viewer.  A seemingly simple and stark video, the split screen shifts between alternating black and white spinning tops that move across and through black and white grounds. There are moments when the screens unify and the tops criss-cross the central divide. This highly orchestrated performance is enlivened by the inbuilt chaos of the spinning objects.

In keeping with a number of the artist’s other video works, On the Edge sees a lot of time being given over to the organization and orchestration of the shoot.  Rios pays painstaking attention to every detail, from the entry of the spinning tops into the shot and their formal layout in the frame, through to the angle at which they appear on screen.  These elements are not left to chance; they are worked through over a sustained duration and then reduced down further into a tightly controlled video sequence. Despite all this editorial control On the Edge tracks the random and abrupt interaction between the various spinning tops.  So while the terrain and aesthetic might be austere, the activity is lively and rich in its poetic resonance.

To create this work, Rios travelled to the Mexican town of Tepotzlan, where the game of trompos is a very popular and highly competitive activity.  Trompos is an ancient pastime; it is believed that the spinning tops were originally brought to Latin America from Japan many centuries ago.  In modern Latin America this game continues to be played on the streets, especially by children of the lower and middle classes. For this particular video, Rios not only crafted his own highly refined and oversized wooden spinning tops, he also enlisted the help of thirty skilled trompos players to activate these objects off camera.  A player tightly wraps a length of string around the “trompo” that is thrown into a clearly marked space on the ground.  In certain versions of this game the objective of the players is to eliminate or knock, an opposing player’s spinning top out of the delineated area.