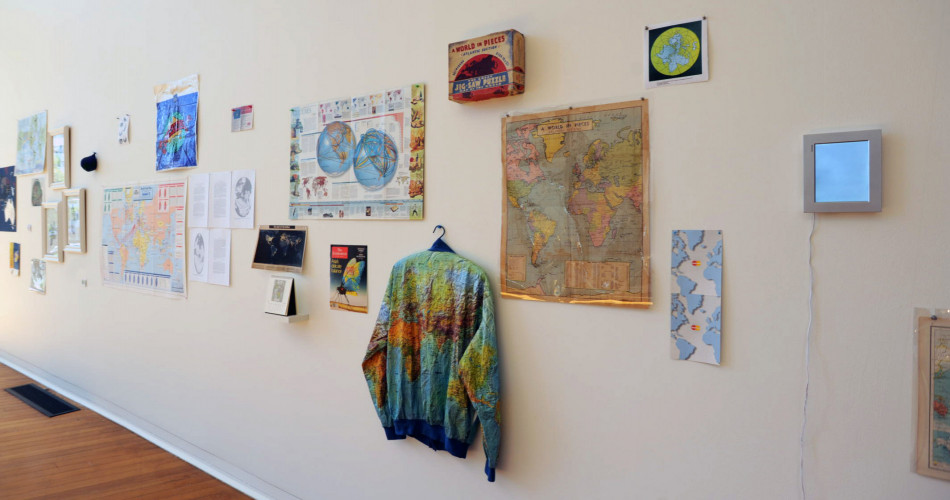 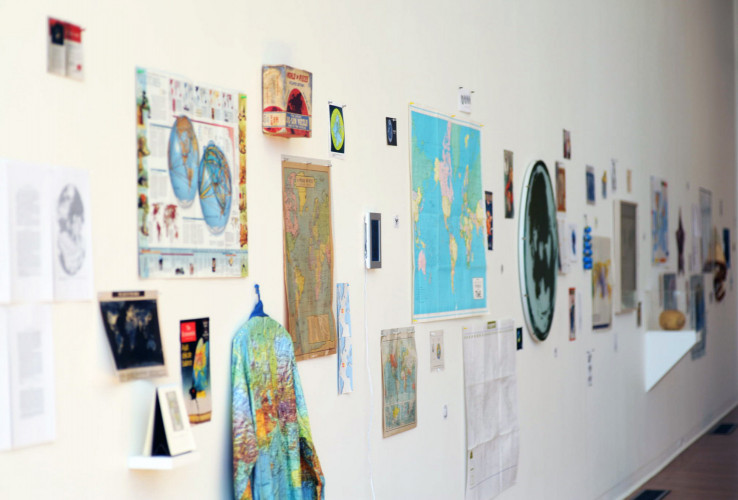 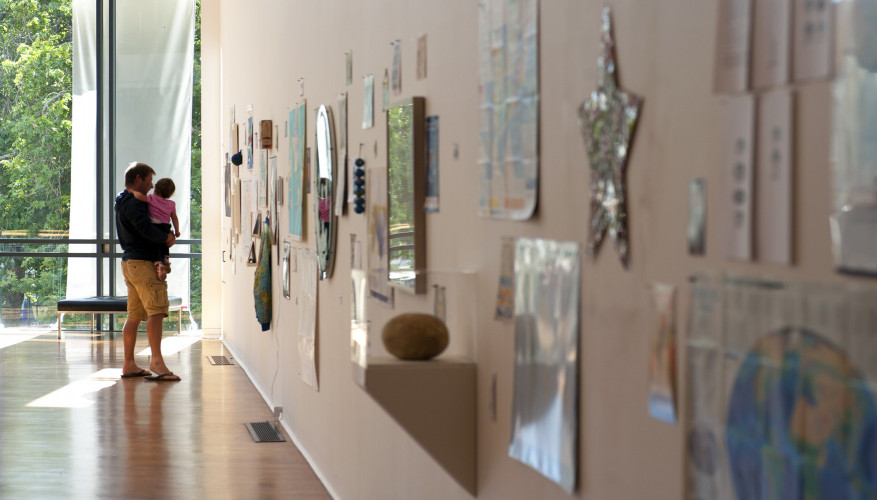 Ruth Watson’s considered response to the challenge of producing a work for the Gallery’s Big Wall was to delve into her personal cartography collection. Amassed over a sustained period, Watson has been generating map related artwork for more than two decades and this installation provides a unique insight into the artist’s magpie-like ability to spot and sleuth out a rich treasure trove of representations of the world. There is also a deliberate strategy in the accumulation of visual information, workroom pin-board layout and blurring of the relationship between source material and “finished” artwork, which foregrounds ideas around the act of research and its presentation.

As Watson wrote in correspondence relating to the show:

‘I have collected a lot more map related materials [than those] that are on display here, so some comments on the selection of items for Myriad Worlds must arise. There is a focus on the image of the world in its increasing form as a symbol or leitmotif for globalisation. You might think that using the image of the globe for this is a no-brainer, but is it really justified when we consider what “globalisation” is usually meant to refer to. The citizens of the largest continent on earth – Africa – could easily point to the ridiculousness of the totality of trade and cultural contact from which they are regularly omitted. Look at any contemporary map of cyberspace and you will see that again, Africa remains a near -19th century phantasm of a lost, dark continent. One map shown in this exhibit is included because it omits New Zealand from its map of connectivity – both for 19th and 20th centuries – something we don’t think we are particularly excluded from. The truth of maps hopefully needs little deconstruction, as we all know people make them to tell the stories that interest them and there are always unforeseen consequences, irrespective of good intentions.’

In Myriad worlds, the seemingly simple process of gathering, selecting and exhibiting an archive, is eschewed by the complex meta-narratives and histories that this plotting reveals. In a sense, it is Watson’s willingness to show her “card-hand”; the installation does not attempt to hide the relationship between studio practice, image mongering and academic activities, that makes this such a thought provoking engagement with the Big Wall site. There is a directness or openness to the proposition being presented here, which allows ample scope for one to roam and speculate about what it communicates. In Myriad worlds, as Watson points out ‘the map has its hands dirty with the matters of the world’, the relative purity of cartography is sullied by a plethora of cartooned, deflated, facsimiled, diagrammatic and resized worlds.

The artist acknowledges the support of the Elam School of Fine Arts.