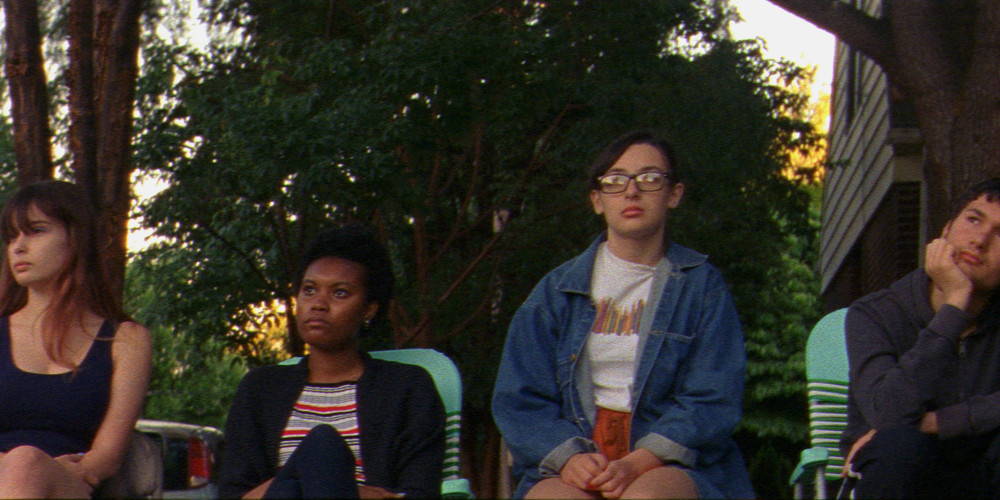 Every day for 30 years, Nancy would sit on the street corner and watch the sunset

Sam Hamilton’s 16mm film clocks in at just under eleven and a half minutes. For its entire duration, four teenagers sit silently in a row on deckchairs. This might sound like a joke set-up at the expense of generation Z-ers, but there isn’t any punchline.

Hamilton is a New Zealander residing in Portland, Oregon in the United States. His film is a restaging of a thirty-year long ritual performed by his former neighbour, Nancy, until she moved away. In this filmic homage, Hamilton has positioned the four teens outside by the street – at the same location where Nancy used to sit – in what one imagines are typical suburban surroundings in the Pacific Northwest.

Throughout the film, the only sounds heard are those of the surrounding environment: birdsong, the low hum of distant traffic, the wind rustling the leaves, an occasional passing car, sirens and the sounding of a train’s horn in the distance. The demeanours of the four individuals shift throughout; variously, there are displays of stoic concentration, boredom, wistful contemplation, restlessness, self-consciousness and vague amusement.

Hamilton’s enlisting of teenagers into his film implies a transferral of Nancy’s thirty-year tradition of watching the sunset onto the next generation. Transforming the simple act of watching into a genealogy lends a certain eminence to the practice, as if it now carries the weight of custom. The habit of sitting quietly and noticing one’s surroundings, or concentrating on a single thing for a time, has been long prescribed as a means of attaining higher levels of consciousness, or benefiting mental health. In the present time, with our attention spans rationalised as an economy and pulled in all directions by a multitude of media and electronic devices, the action of sitting calmly and observing becomes both therapeutic and an act of resistance.