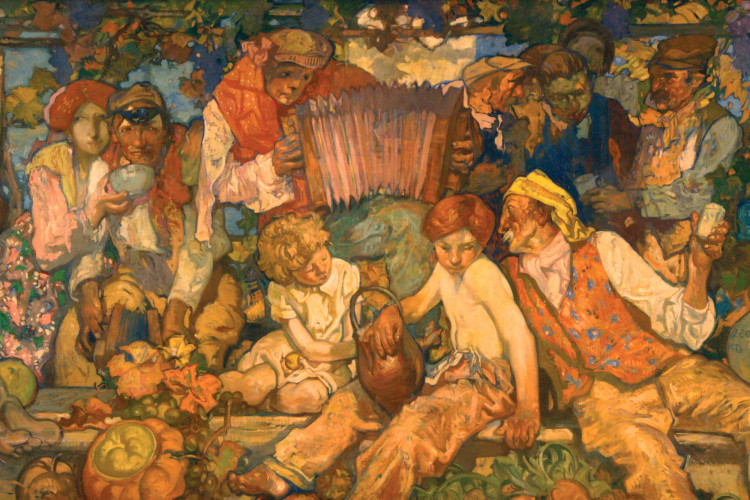 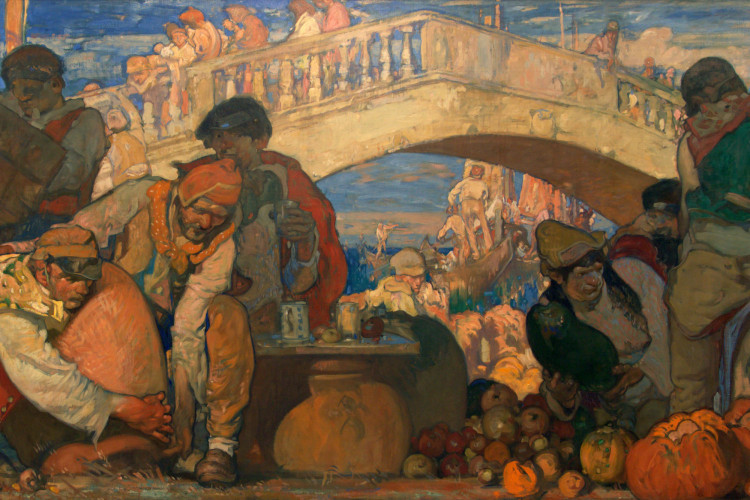 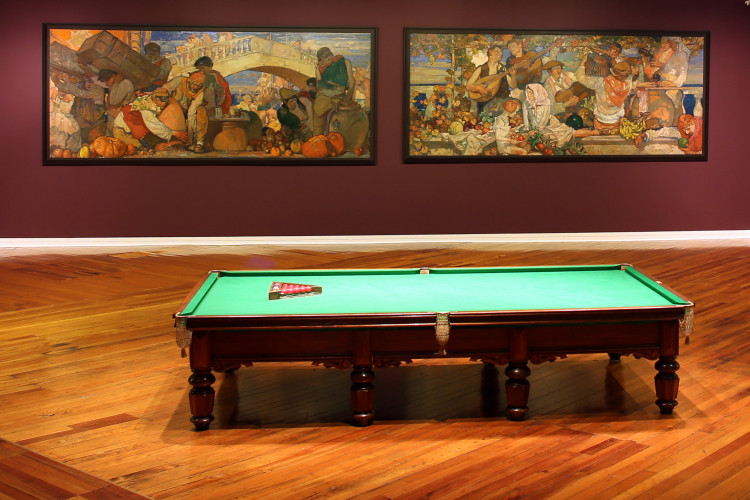 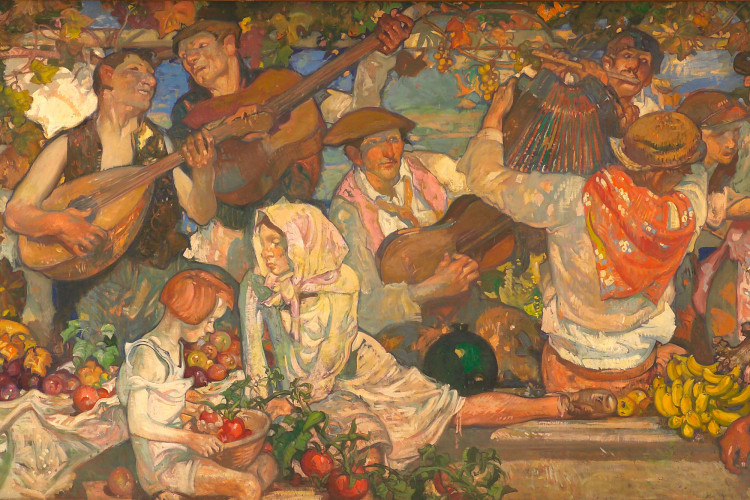 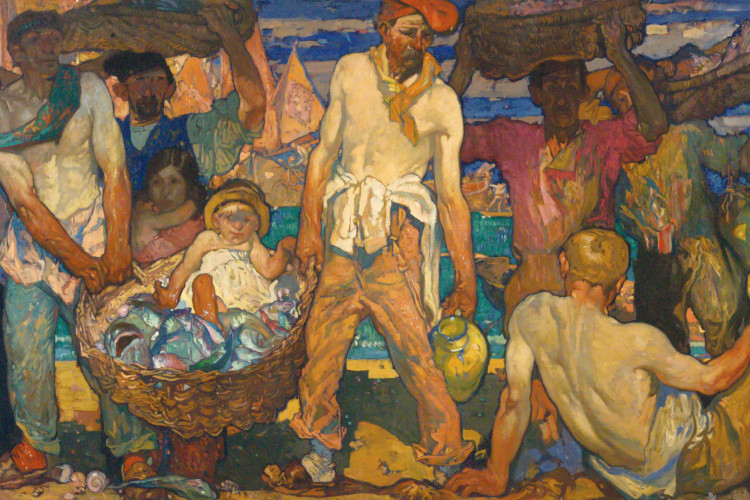 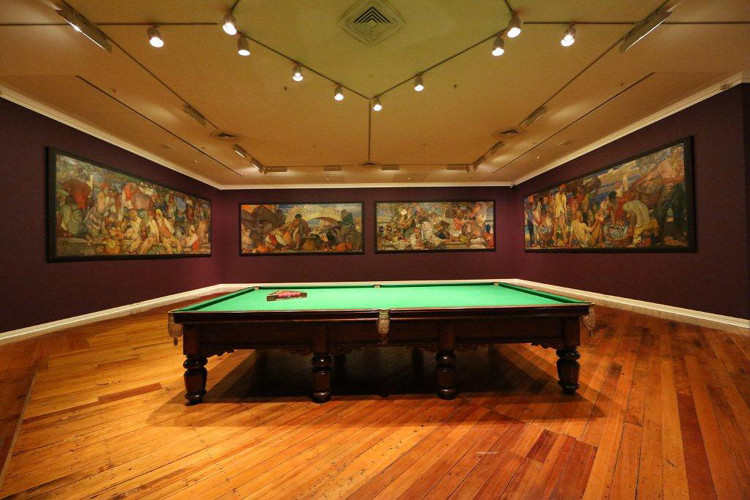 Captain Winterbottom and the Billiard Room of Horton House

The Dunedin Public Art Gallery’s magnificent four large wall murals by artist Sir Frank Brangwyn are celebrated in this exhibition alongside a number of the artist’s works on paper. Predominantly, but not exclusively figure studies, these come from both the Gallery’s collection and the private holdings of Mrs Susie Hanan Jones, who inherited them from her father, Solicitor Mark Hanan, who had formed a friendship, and sustained a decade-long correspondence with Brangwyn after World War 2.

This exhibition aims to fondly recall the personable tale of how these murals came to be part of this Gallery’s collection, as well as making a reference to the original context for the work, which was formerly an extensive wall frieze about 122 ft long, fitted above ‘modern’ Jacobean oak panelling, which extended to a height of 9ft, within a room with a 16ft stud.

First commissioned in 1915 by businessman George Harold Winterbottom for installation in the billiard room at his residence, Horton House near Northhampton, the mural frieze was subsequently removed from the room in sections after Winterbottom’s death in 1934 and auctioned off.  The Fine Art Society in London then bought and looked after some of the mural sections, including all of the ones you see here today.

In 1951 six sections of mural were acquired for New Zealand public collections from the Fine Art Society – four for Dunedin and two for the National Art Gallery, now Te Papa Tongarewa.  Generously purchased for the Gallery by the Sargood Trust, it was largely due to Mr Hanan’s knowledge, perseverance and persuasion, that the murals were secured for New Zealand, combined with the commitment of the Sargood family to sustain their benefaction towards the Dunedin Public Art Gallery. They had been major patrons since at least 1926, when Sir Percy and Lady Sargood contributed to the purchase of the former 1925-1926 International Exhibition building in Logan Park, for use as the Gallery, dedicating the gift in memory of their son Cedric Rolfe who was killed at Gallipoli.

When the murals arrived in Dunedin in 1951, they were greeted with much public enthusiasm and in 1954 hung in a new gallery, the ‘Sargood Wing’ which was designed primarily for their display, and once again, supported by Sir Percy and Lady Sargood and the Sargood Trust.

The artist was happy with the works’ new home, and he wrote the Gallery a letter in which he said “The Encouragement of British Art is near to my heart. I am very happy to think my handiwork should be honoured by you, and I wish the Otago Art Gallery every success”.

The Gallery Director, Mrs Annette Pearse was delighted at the acquisition. She commented “I am thrilled that the four Brangwyn murals are coming to the gallery…It is a wonderful gesture on the part of the Sargood Trust and will be greatly appreciated by the many people who admire the glowing colours and fine drawing of Brangwyn”.

It is with pleasure that the Gallery is now able to show these significant, much admired and recently conserved murals, to contemporary visitors within the context of an exhibition, which in style and spirit, the artist, it is to be hoped, would heartily approve of. Not since 1934 have these murals been combined with a billiard table. The table installed here, which comes from an old Dunedin homestead, is currently on loan from ‘Plato’, a restaurant located in the former ‘Seafarers Hostel’ in Birch Street, Dunedin.