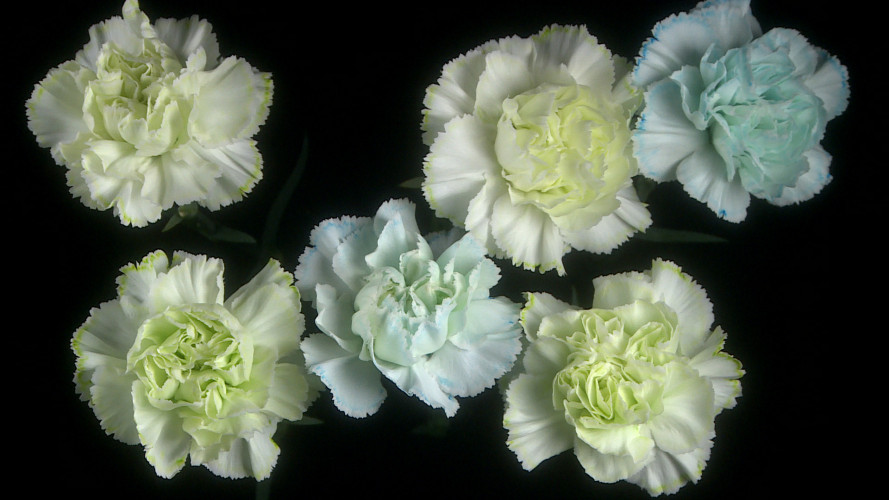 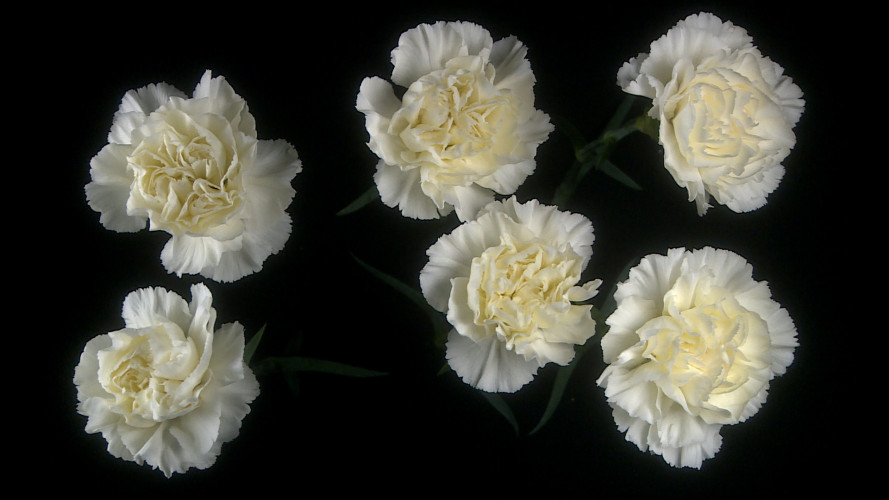 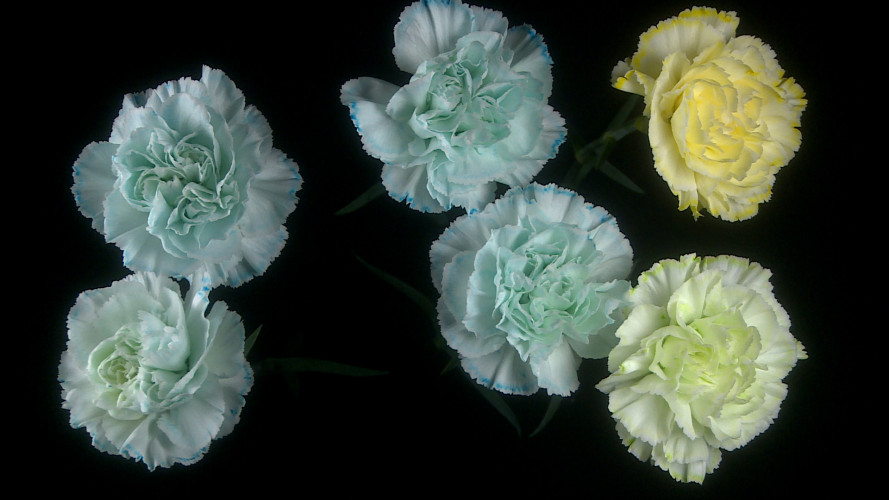 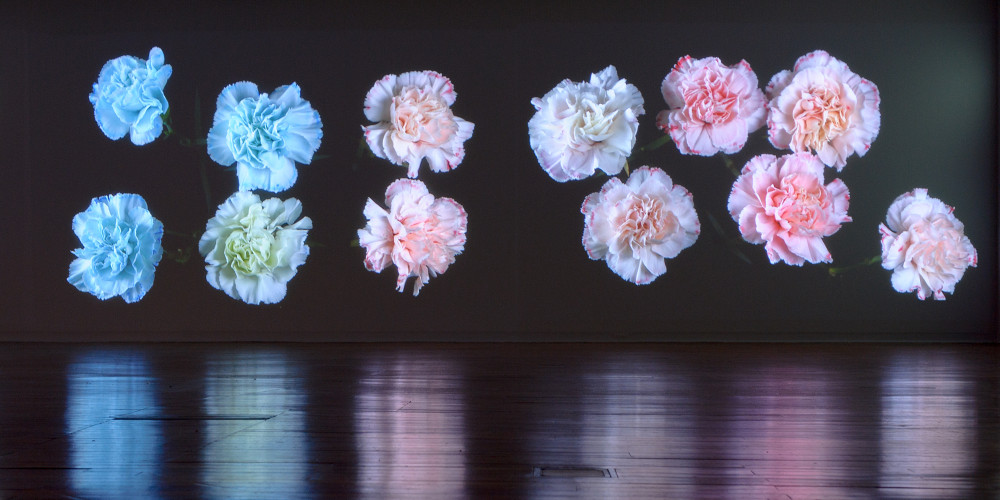 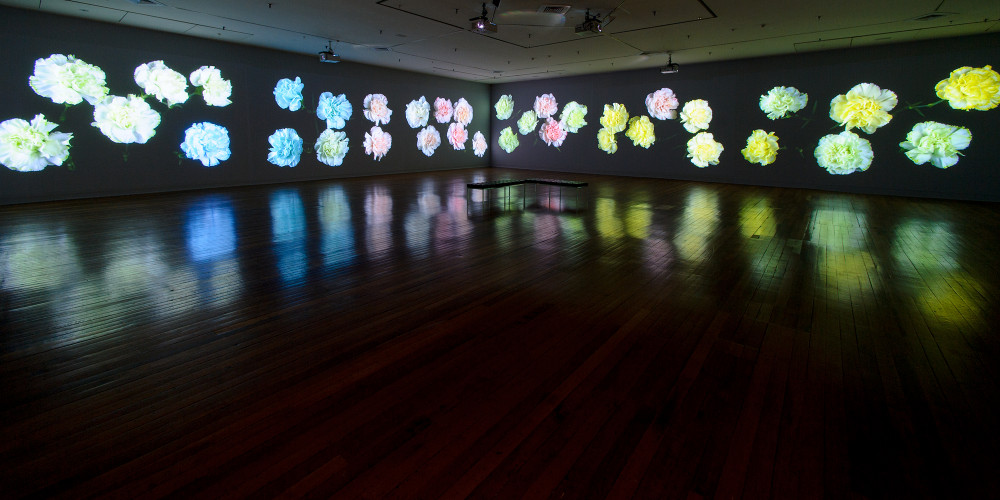 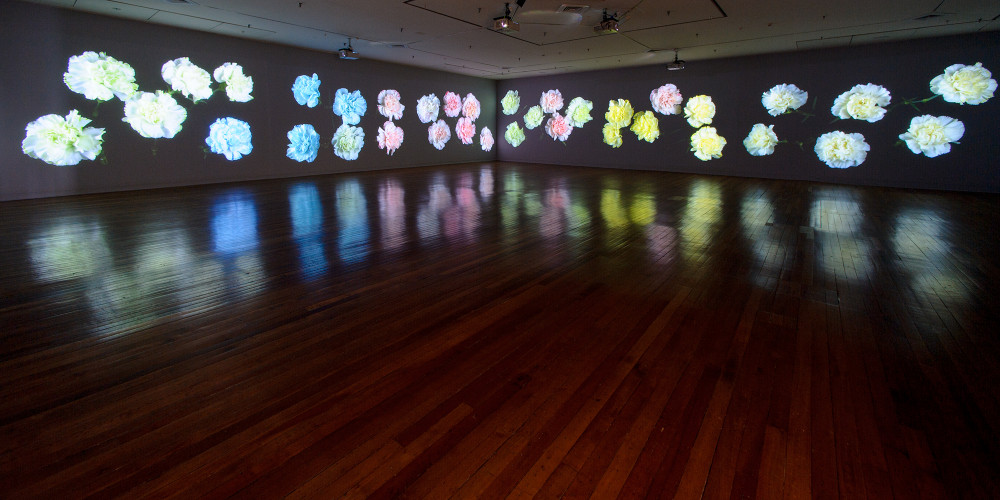 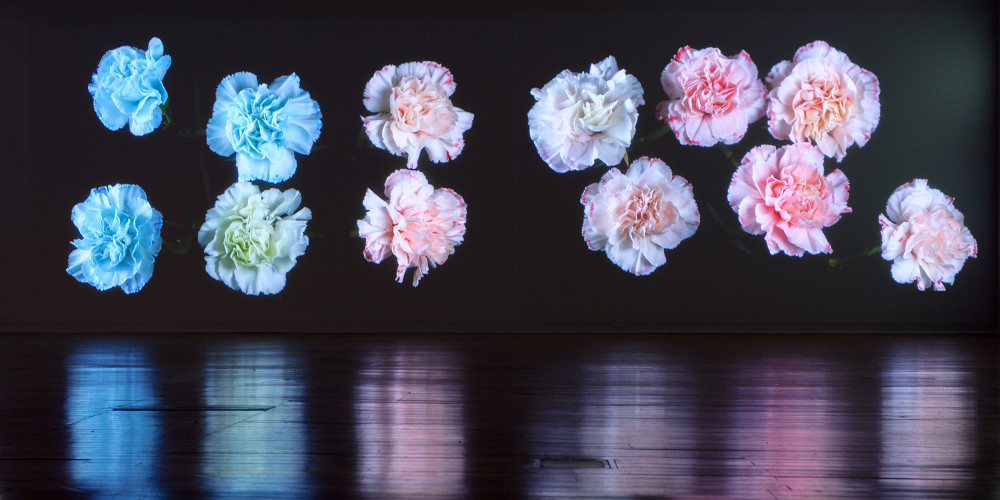 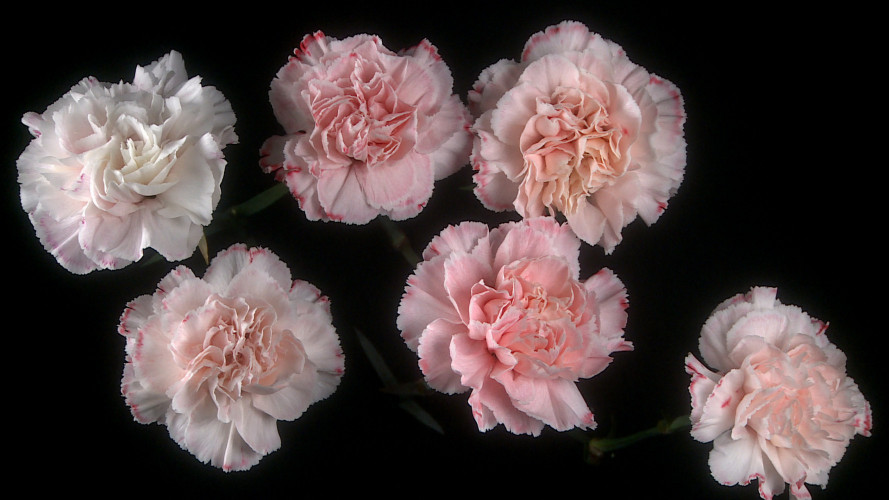 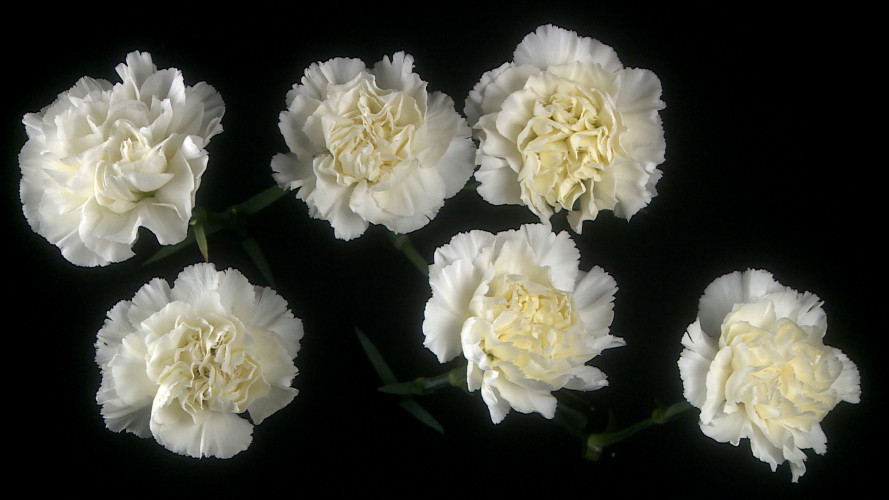 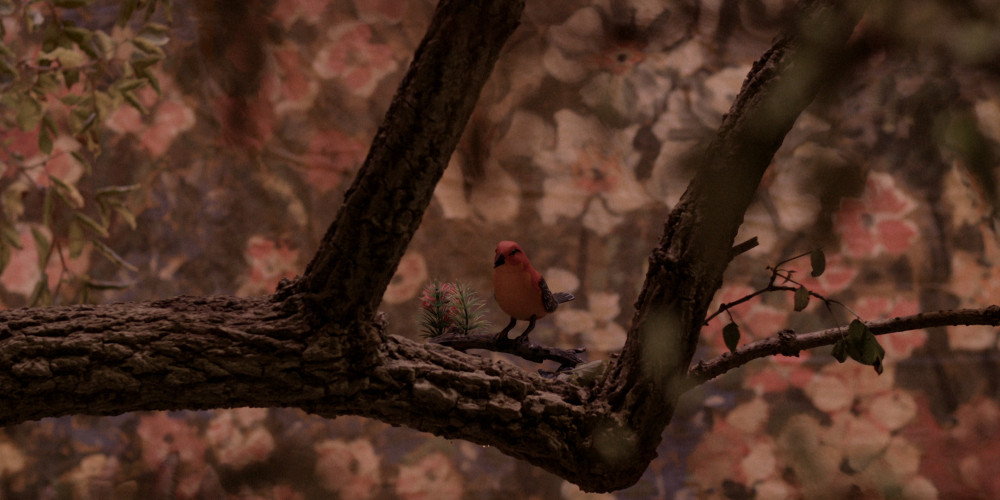 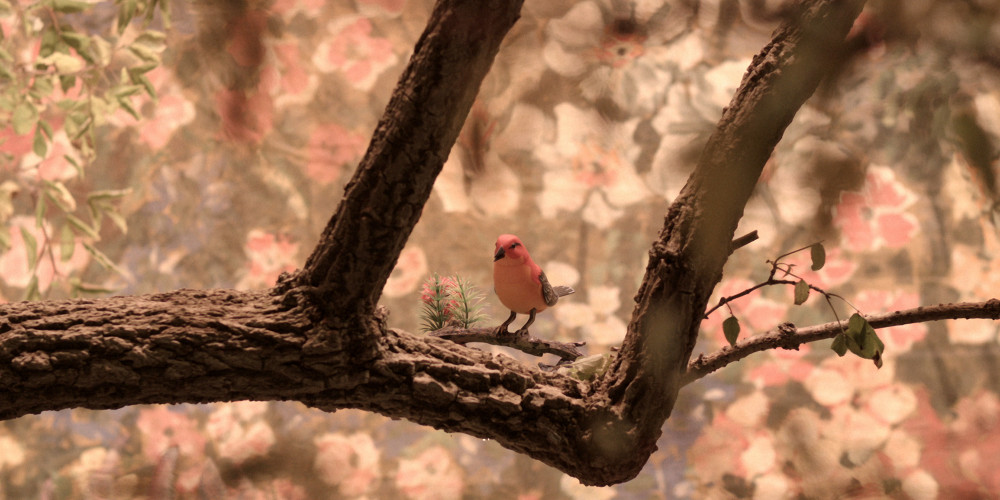 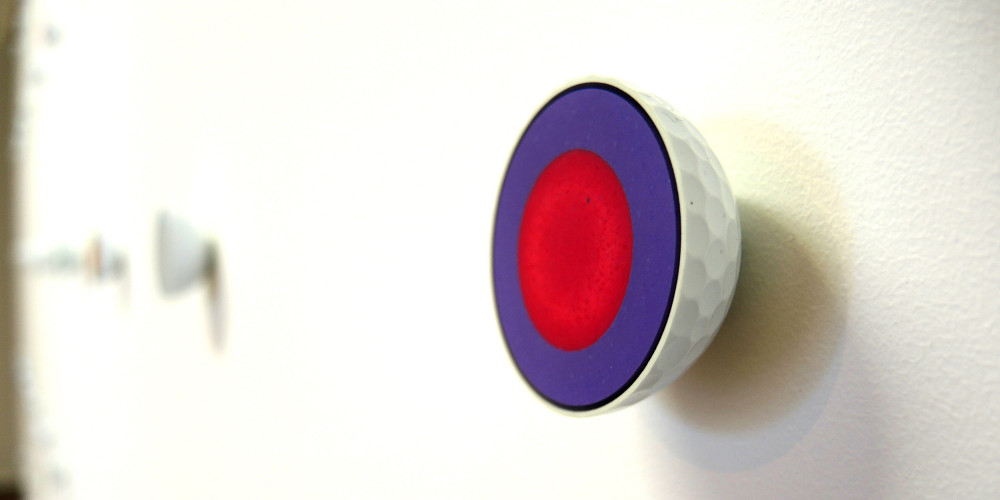 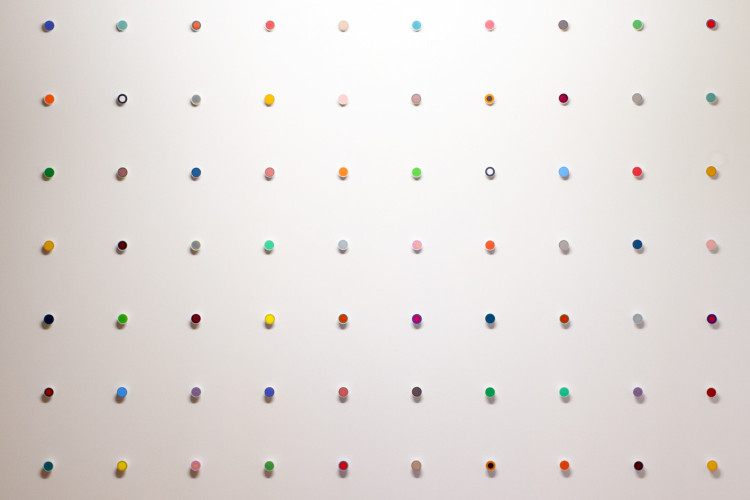 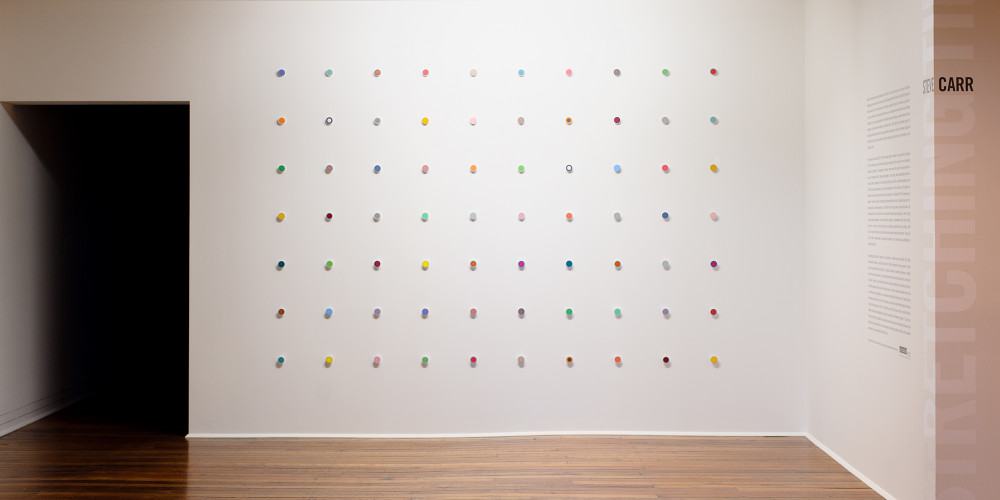 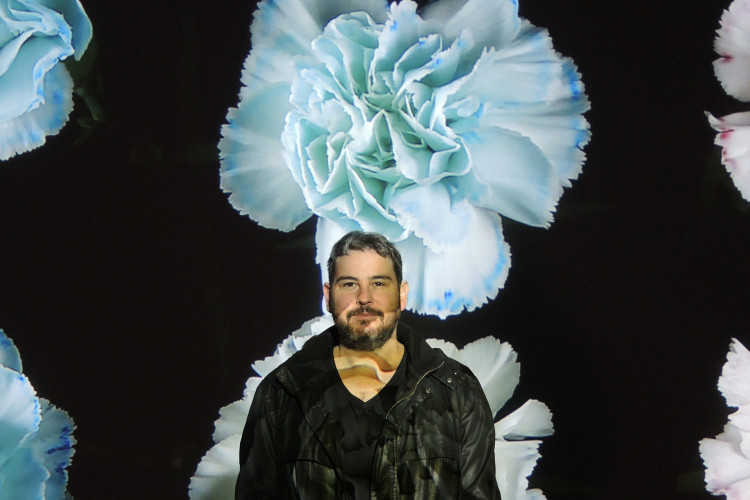 Auckland based New Zealand contemporary artist Steve Carr, spent the later part of last year in Dunedin developing an exciting new series of work as part of the Dunedin Public Art Gallery’s Visiting Artist Programme. Over the course of his ten week residency Carr worked on a number of ideas that have been in gestation for a long time and which he was finally able to work on over a sustained period towards this show. Stretching Time builds on Carr’s increasing interest and utilisation of camera technologies to generate works that raise awareness and transcend the conventions of cinematic history.  As the title for this exhibition signals, the artist makes viewers aware of both the passage of time and expands the sense of the moment; through the subtle utilisation of time-lapse techniques, theatrical staging and by focusing in on and repeating a series of singular forms.

The show begins with Range (2013-2014), which brings together a selection of unique golf balls, prototyped in 2013 for release this year. They have been tested by and designed for the current top tier of international professional golf players.  The opportunity to develop a work around these objects took place when Carr was on the Headlands Artist in Residence programme in San Francisco, which immediately preceded his arrival in Dunedin.  However, this is the first outing for Range; time and this context have allowed the artist to rethink these strangely coloured cut discs. The presentation here, at the threshold or in the lobby of the exhibition, is like a scientific chart that punctures the optical field. In Transpiration (2014) a mesmerising six projection ‘surround’ installation, he literally and metaphorically slows the act of spectacle down and in the process expands our sensory experiences.  In this thirty metre screening viewers are made very aware of the materiality of video, and in particular the frame, through the repeating and sequencing of a series of highly manicured flower arrangements. In a way he wants the spectator to be overwhelmed by the films, distilling the shoot to a simple set of technical principles; close-up/blow-up, duration/time-lapse, still/loop.  While this is a rather dry technical process the final films are more physically and optically expansive.  Having said this, Carr takes a common flower, the carnation, and transforms it into a deeply sensual, spellbinding and highly charged still-life.

The underlying gravitas that is expressed in Transpiration is countered by American Night (2014), which makes playful references to cinematic history and its artifice, particularly the closing sequence in David Lynch’s dark masterpiece Blue Velvet (1986).  In typical Carr fashion, an underlying seriousness is brought into question by a diminutive work, in scale and placement, which reveals the artificiality that is ever-present in the show.  By setting a small electronic bird against a theatrical backdrop and also condensing the period and effects between sunset and sunrise to fifteen minutes, Carr reminds viewers how fake this entire set-up is and how reliant we consistently are on a suspended state of disbelief. The films reveal a lot, yet by their very nature they manipulate the mise-en-scène to show you more information and particular changes by reducing a large durational period down. And, it is through this process that the sense of time is stretched. With the cinematic moment being elongated you are able to lose yourself in the immersive situation.  As Carr notes, “the idea of stretching is important in a physical and personal way, because I want people to be aware, even before they see the show, that this is as much an exercise in relaxing, absorbing and sinking into a cinematic experience as it is contemplating the effects of time.”