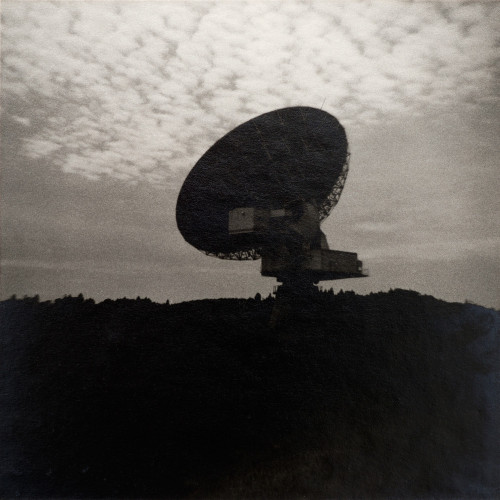 The sombre or mysterious quality of Peter Peryer’s Mars Hotel Portfolio is engendered through a combination of subject matter, framing, and the technical parameters of the camera that Peryer used at the time. He produced these works in the 1970s using a Diana camera, bought at a toy shop. With limited controls and a fixed aperture and shutter speed, this camera renders dark images that tend to fade into a soft black border at the edge of the image. The buildings and structures in these photographs catch an atmospheric median light, and the horizon lines often feature a brooding, dramatic sky. The featured buildings seem to take on anthropomorphic characteristics; they are seemingly abandoned or derelict, or reach into the clouds. Photographer Tom Elliott (active 1975) called the Warkworth Satellite Station in Mars Hotel Portfolio I, ‘a huge monolith ear’ cupped to stratocumulus clouds.1 In the context of The Brink, this photograph forges a relationship with the cloud forms in Colin McCahon’s Oaia and clouds. Incidentally, McCahon was an artist who inspired Peryer, and to whom the Mars Hotel Portfolio was gifted.2

The concept of memory also plays a part in this series. In parallel to the way these images contain memories of their pasts, Peryer described his experience of being born during World War II, with an anecdotal recollection of ‘an uncle, now dead, flying his fighter low over our house before leaving to crash overseas’.3 In this personal and very lateral reflection on his own work, Peryer conveys a conceptual, poetic quality to his practice that seems to run in parallel to the formal quality of these images.