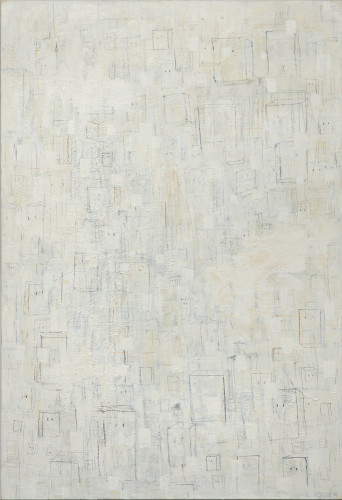 Oil, crayon and graphite on canvas
Collection of the Dunedin Public Art Gallery

Untitled (White Bags) forms part of Séraphine Pick’s mid-1990s explorations into the concept of memory and its relationship with perception and imagination. Drawing on emblems that recall her own childhood experiences, Pick considered the way that memory works through inscribed and re-inscribed pattern making, as a reflection of ‘conscious and unconscious process’.1

Differing in size and definition, the image of a paper bag with cut-out eyes is repeated and erased many times across the surface of this painting. With one of the white bags over her head, a form floats in the centre, drawing the reader into a kind of spectral narrative. It could be a playful Halloween costume, or a motif that alludes to the idea of anonymity or avoidance of the social gaze.

Not all of the white bags are mask-like, nor are there many bodies, or spectres, attached to them. Three-dimensional cubes merge into indistinctive cloud-like forms or the visual evidence of erased mark-making, creating a layering effect that recedes from or rests upon the surface. As a visual representation of the function of memory, images are retained or impressed beneath surface images. Formal contrasts are present in line and erasure, rich texture and void, and abstraction and figuration.