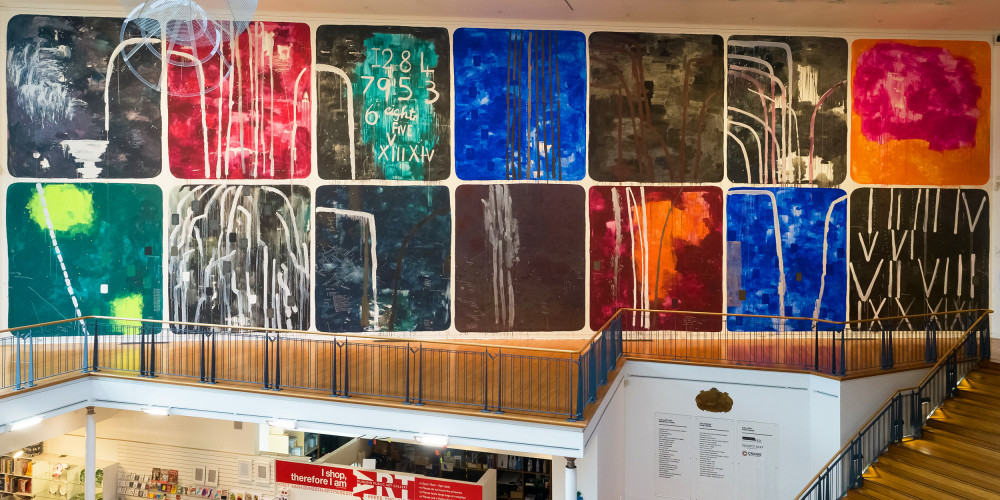 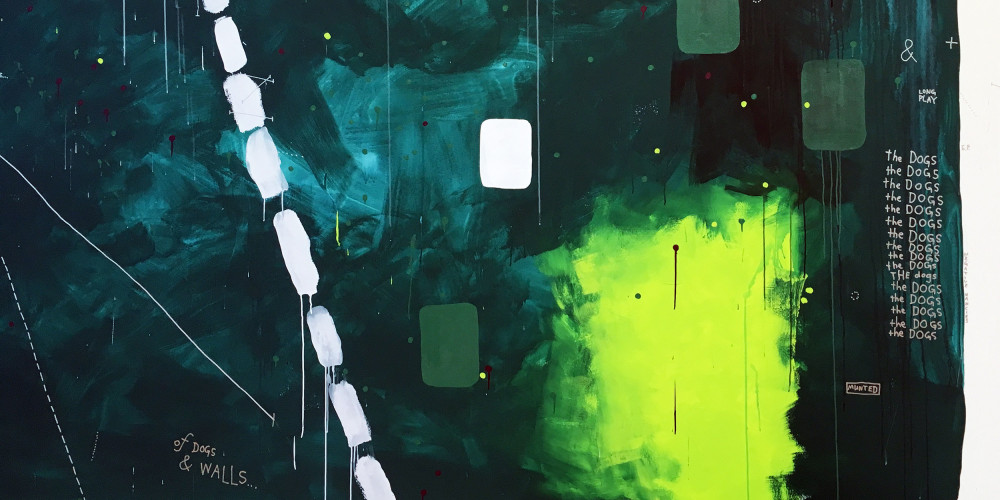 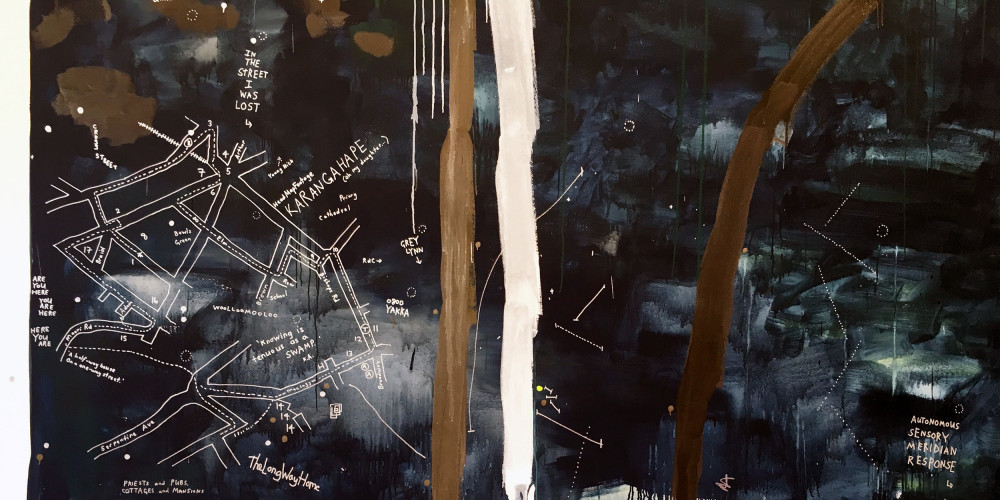 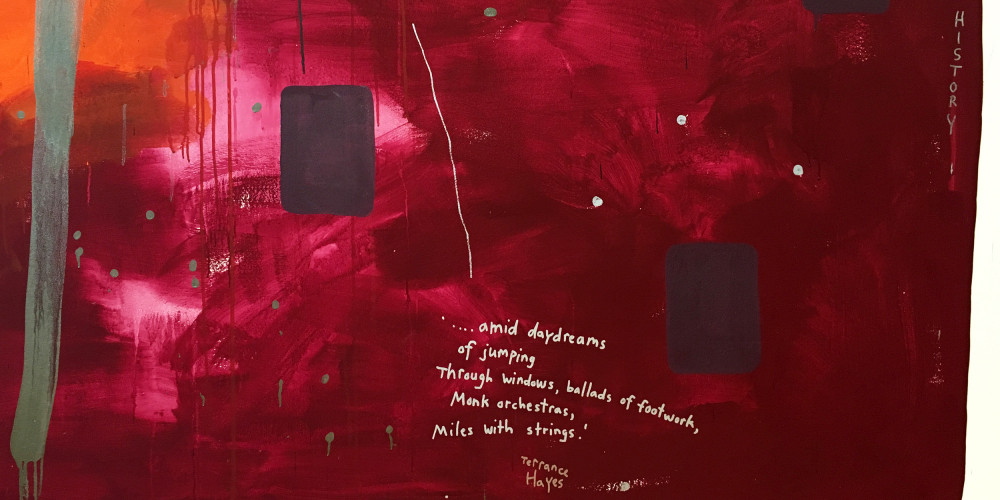 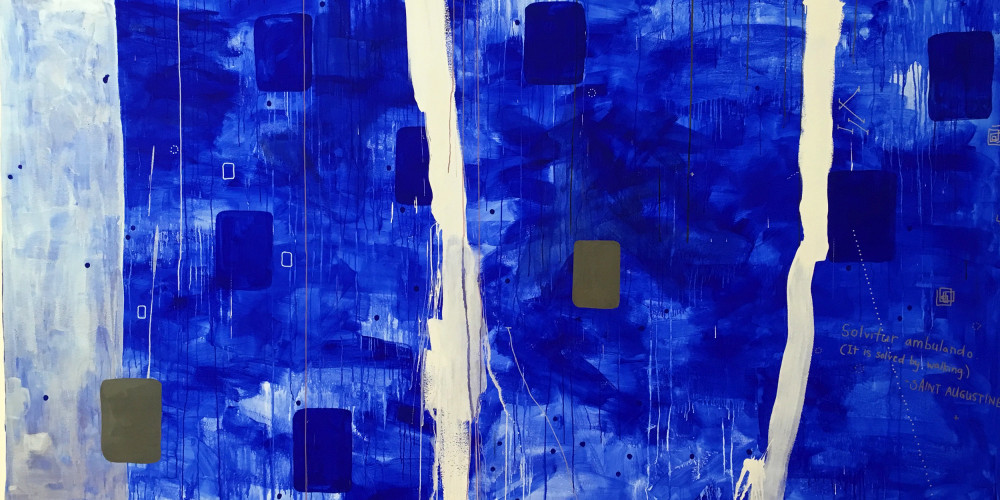 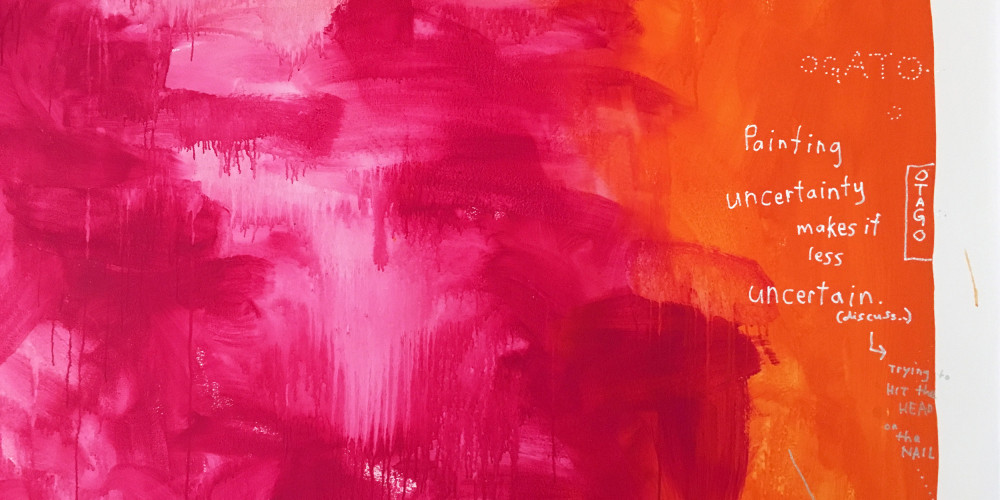 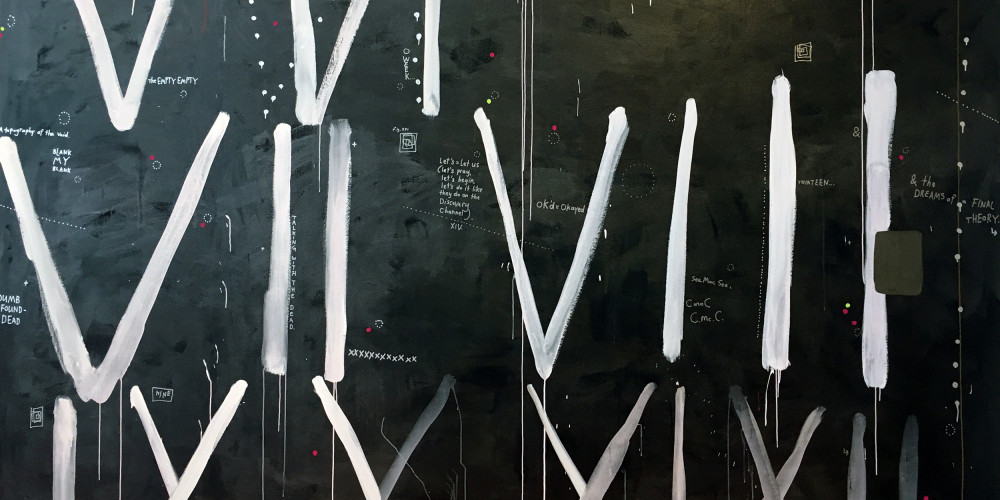 ‘A godless world is as mysterious as one suffused with divinity, and the difference between the two may be less than you think.’
John Gray, Seven Types of Atheism (2018)

With The Falls, a large painting occupying Dunedin Public Art Gallery’s Big Wall, contemporary artist John Reynolds seemingly attempts a reworking of the Colin McCahon Waterfall theme & variations (1966) mural housed at the University of Otago’s main library. McCahon’s Waterfall theme & variations was commissioned by the University in 1965, with the artist submitting two schemes for consideration. McCahon drew this proposal on the reverse of his [Numbers: Design for University of Otago Library mural], which was his initial preference for the commission. In 2019, the centenary of the birth of Colin McCahon, working under the fancy handle of the ‘epistemology of loss’, Reynolds rehearses a lament of the McCahonian falls – a landscape sublime made mortal.

Continuing his long-standing interest in McCahon, and in works that track his journeys through the world, The Falls can be seen as an extension of Reynolds’ ongoing Missing Hours project.  In Missing Hours, which has been continuing over a number of years, Reynolds ruminates upon the disappearance of Colin McCahon in Sydney’s Botanic Gardens on the eve of his exhibition I will need words, which opened as a satellite exhibition in the 5th Biennale of Sydney in 1984.  McCahon had become separated from his companions and, in a now-infamous turn of events, became lost in central Sydney, discovered the following day by police in Centennial Park, 5 kilometres from the Botanic Gardens and eventually located by his family at St Vincent’s Hospital.  Speculation on McCahon’s ‘missing hours’ has become a subject for subsequent generations of New Zealand artists and writers, not least in the minds-eye of Reynolds himself.

Taking his own meandering path from Missing Hours to The Falls, Reynolds uses this Big Wall painting to revisit another chapter in McCahon’s story - Waterfall theme & variations. Waterfall theme & variations might be seen as something of a map that extends from McCahon’s painted ‘conversations’ with William Hodges, who travelled here as a member of James Cook's second voyage to the Pacific, through to time spent in the natural environment. The Falls presents less a variation of McCahon’s landscapes, and more a parade of collapse and disarray. Part homage, part vagabondage, and part monumental shorthand charting a disquiet of arcs, feints and falls, Reynolds frames his enquiry as one of ‘thinking through McCahon, rather than merely about him.’