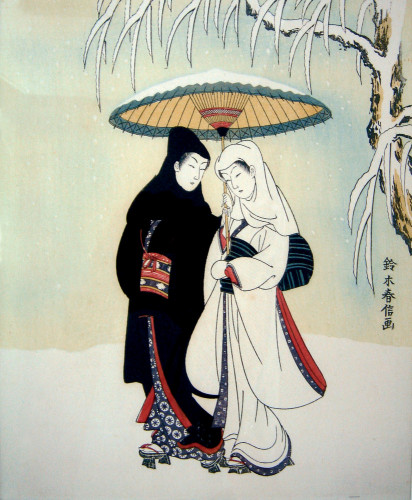 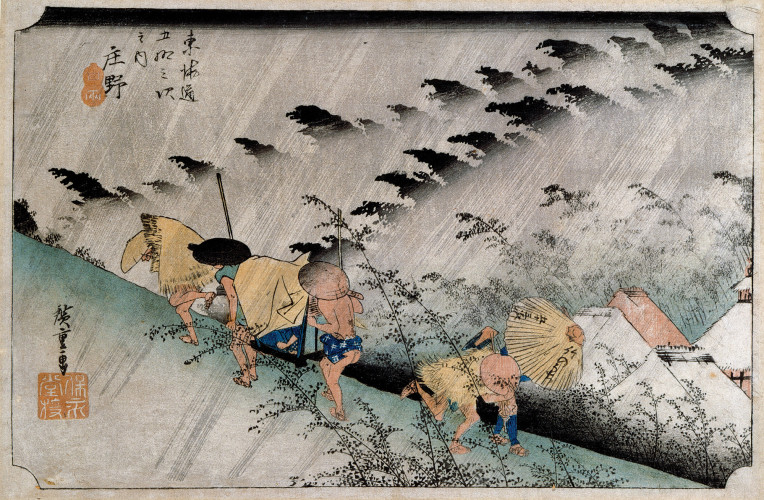 Japanese Prints from the Collection

The title of this exhibition is an extract from the diary of Izumi Shikibu, a noblewoman from 10th-11th Century Japan. Throughout Japan’s history personal diaries and letters have commonly referenced the weather, or poetic comparisons between human attributes and seasons. Too, weather, or the seasons, is invariably referenced in the haiku, the 17 syllable Japanese poem. This poetic art form often contains recognition of the close relationship that exists between Japanese life and nature. Diverse climates, dramatic weather changes and clearly defined seasons inform life in the islands of Japan. The northernmost island, Hokkaidō, lies in the sub-arctic zone; central Japan is in the mildly temperate zone; and the southernmost islands are categorised sub-tropical. Heavy snow, monsoon winds and rain, and other elemental factors contribute to diverse seasonal changes in weather and climate.

The capital of Edo (modern Tokyo) was the centre of fashion and pleasure from the 17th to the mid-19th Century, and many woodblock prints depicted urban themes. Landscape (including the depiction of season and weather patterns) became a popular theme of colour woodblock prints (ukiyo-e) in the latter stages of the Edo period. There are some exquisite examples here from the F.C.W. Staub loan collection as well as from the Art Gallery’s own collection. The prints in this exhibition have been organised into seasonal themes, yet the weather does not necessarily conform to seasons.  For example, rain occurs throughout the year and does not fall only in spring. Therefore, the seasonal progression must be read as a literal rather than a truthful representation of weather patterns.

This exhibition of colour woodblock prints on paper concentrates on the latter Edo period in Japan (1800s). Included, however, are one print by Suzuki Harunobu Lovers in the Snow (c1768) from the early or romantic era of the Edo period and one print by Katsukawa Shunchō Three Young Women with Food and Musical Instruments in the Country (c1780), which is from the middle or realistic era. Both of these images beautifully illustrate the popular genres of their time. The remaining images are from the latter Edo period and are landscapes, with the exception of those by Utagawa Kunisada (1850s) who has chosen to depict the seasons symbolically through the printed fabric of women’s kimono.

Katsushika Hokusai and Andō Hiroshige are considered to be two of the most adept landscapes artists from the latter Edo period. Hokusai adopted a particular technique of perspective and expressiveness that created an instantly recognisable style, showing a preoccupation with formal beauty in nature. Noticeably, Hiroshige created a serene and poetic style and, unlike Hokusai’s desire for formal excellence, he attempted to capture the harmony of life in rural Japan. Hiroshige’s images have a softer dynamic compared to the intense energy in the formal qualities of a Hokusai print.