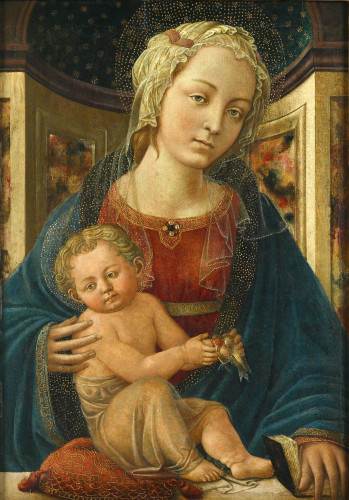 Egg tempera on gesso on wood
Collection of the Dunedin Public Art Gallery
Given 1973 by Mary, Dora and Esmond de Beer

This painting of the Madonna and child is arguably one of Florentine artist Zanobi Machiavelli’s finest works. According to art historian Giorgio Vasari, the artist was a pupil of Benozzo Gozzoli, himself an assistant to Fra Angelico, the Dominican friar and artist responsible for the beautiful Annunciation and the individual fresco paintings in the monks’ cells at the convent of San Marco in Florence. Machiavelli was also influenced by Francesco Pesellino and Fra Filippo Lippi. Well known Renaissance art historian Bernard Berenson considered this work one of Machiavelli’s best, probably completed while he was still associated with Lippi. The model is thought to be Lucrezia Buti, the daughter of a Florentine silk merchant, who not only modelled for Lippi but also bore him a son.