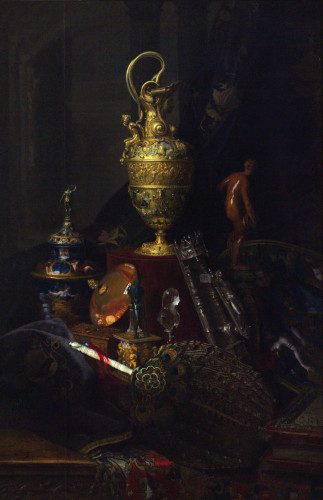 French painter Blaise Alexandre Desgoffe was a regular exhibitor at the Paris Salon throughout the nineteenth century, including this work Still Life, which was exhibited in 1861. In the work, Desgoffe meticulously paints emblems of commerce; such as the silver-gilt jug, a crystal bust, opulent textiles, a peacock feather fan, a small statuette, ceramic plates or enamel vases. All these precious objects in Desgoffe’s assemblage are man-made, and in 1861, would have been considered lavish signifiers of wealth.

Desgoffe produced this work during the reign of Napoleon III, in the context of the Second Empire and with the aim of celebrating a prosperous France. Increasingly his work ‘reinforced two important objectives of Second Empire policy: the sponsorship of an official realist style and the creation of closer ties between art and industry.’ Desgoffe’s critics accused him of never moving beyond ‘official realism,’ with his paintings being simply ‘precious copies of precious things.’ However, Desgoffe’s dimly-lit Still Life offers another view into the world of still-life paintings, which instead of flowers, or fruit, presents the accoutrements of the French Empire’s propaganda machine.