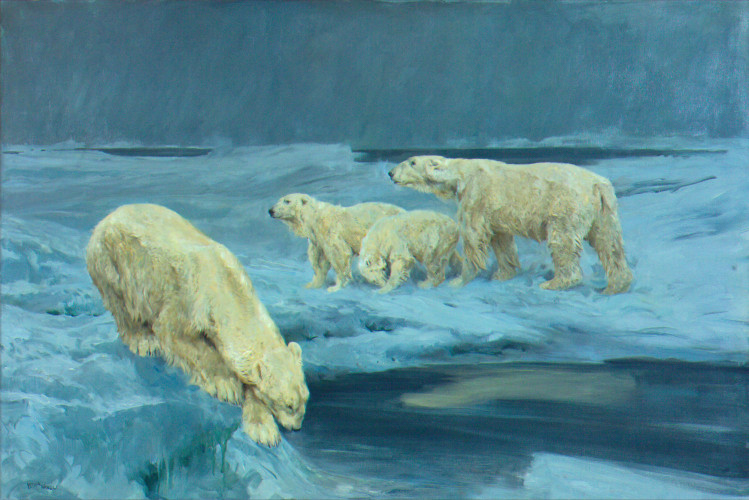 Oil on canvas
Collection of the Dunedin Public Art Gallery. Purchased 1920 with funds from the Peter Smeaton Bequest

British painter Arthur Wardle was an expert at painting animals. Wardle was only sixteen years old when he exhibited at The Royal Academy in London for the first time. Well-known for his extensive range of domestic animal paintings, specifically dogs, Wardle sometimes ventured into painting more ‘exotic’ animals like the polar bears in this work, Where the Ice King Reigns. This work was purchased in 1920 by the Dunedin Public Art Gallery with the bequest of Peter Smeaton.

The irony of Wardle’s painting, showing polar bears roaming around their natural habitat, is that they were, at the time, caged in a concrete pen in London Zoo. Wardle frequently painted animals from sketches he had made at the zoo. Today the polar bear is synonymous as a signifier of climate change, but back when Wardle painted the bears, they were curiously exotic animals, never seen before by London audiences. As the title suggests, the polar bear once was the Ice King and the arctic was where he reigned. Now with dwindling food resources and decreasing land area the icy empire of the polar bear is beginning to crumble.