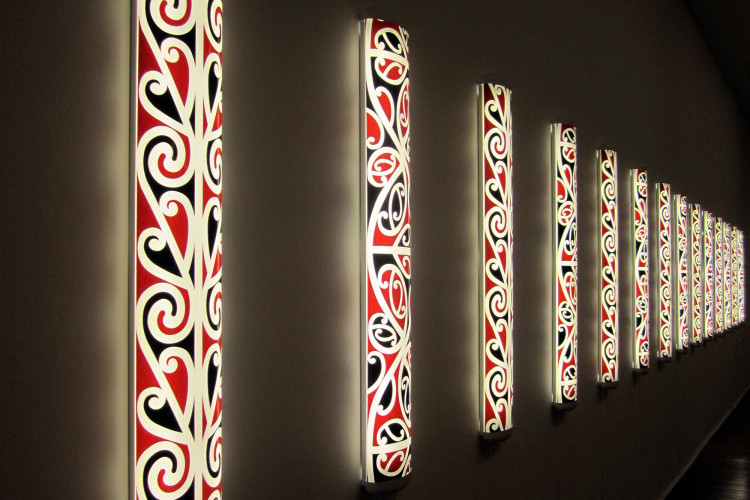 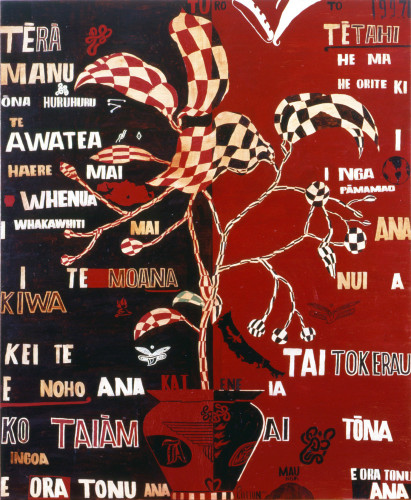 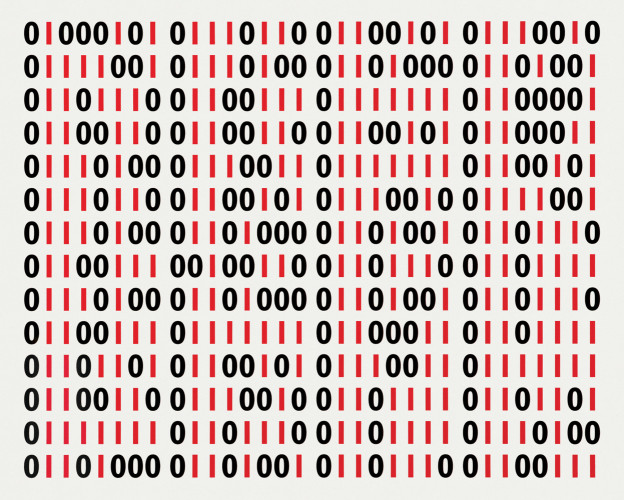 PETER ROBINSON [b 1966 Ngāi Tahu, New Zealand] Everything Affects Everything 2000. Lamda print. Collection of the Dunedin Public Art Gallery. Given 2005 by Jim Barr and Mary Barr.

In the beginning there was darkness.  According to certain Maori mythologies the world began with the coming together of the sky and earth, while for others there were generations of beings who slowly formed, evolved and coupled before the sky, earth and light came into being. In this universe the eternal lights (sun, stars and moon) were controlled by Rangi (the sky father), while darkness belonged to Papa (the earth mother), who lay beneath.  So, in this realm night and the underworld were inseparably connected, both known by the one expression, Te Pō (night/the darkness).

Te Pō brings together a number of key works from the Dunedin Public Art Gallery’s holdings that have been generated by some of New Zealand’s most respected and well known modern and contemporary Maori artists. Alongside these taonga the Gallery has borrowed the Hocken Collections’ recent acquisition Back Words (2011) by Shane Cotton, to complement these key works in the show and also reveal the strong connections that have existed in this community with a number of significant Maori artists. It is worth noting that there has been a rich and sustained dialogue with Maori artists in Dunedin over a number of years, in particular through the University of Otago’s Frances Hodgkins Fellowship and the Dunedin Public Art Gallery’s Visiting Artist Programme. Ralph Hotere, Shane Cotton, Shona Rapira Davies and Peter Robinson have all taken part in this rewarding dialogue.

This exhibition does not seek to simply illustrate or literalise a sense of Te Pō. Rather, it is interested in shaping more of an allegorical reading between the artworks: this is a place where elemental qualities - genealogy, light and dark, materiality and text - are allowed to coalesce. Connections can be found between artists across the space; for example, the grid of zeroes and ones that renders the philosophical quote: “Everything affects everything” for Peter Robinson finds an echo in Michael Parekowhai’s modernised and stylised kowhaiwhai parade. In Shane Cotton’s Ko te rakau a Taiamai (1997) a constellation of Maori sayings and greetings appear across a divided backdrop (half-brown, half-red) and around a potted puriri tree (New Zealand oak). These words and iconography have a particular resonance to Ngāpuhi – when dry puriri wood is burnt the embers are said to spark and scatter as if expressing joy. In Ralph Hotere’s majestic painting, words materialise in a number of respects: the title February, May and the Birds of Ice. The Moon Drowns in its Voices of Water. (1970) is a haiku by Bill Manhire, and the words LOVE and HATE are barely legible in the abstract field.  In these ways Te Pō builds a network of connections between artworks and artists who span different generations, histories and iwi affiliations, but they have all created artworks that challenge perceptions about what constitutes contemporary Maori art.